Due to the rain in the summer months, the Greek grape season wasn’t great, but these rain clouds cannot be seen as the future of the sector. The Greek companies have a good position with the seedless grapes, and the Greeks are trying to retain their position by making investments. Elena, export manager of Memos, talks about the challenges faced by the growers and how the company supports them.

“The grape season wasn’t great,” Elena looks back. “There was too much rain in the wrong period. Shelf life wasn’t good enough because of that.” The problems with the grapes only became apparent after the grapes had been sent on their way to customers in Europe. That made the season even more difficult. 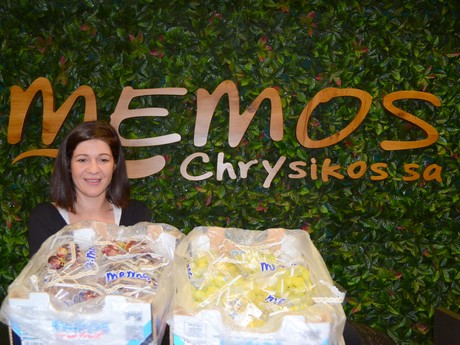 Grapes are an important product group for the company. “We sell more citrus in volume, but grapes have higher profits,” Elena characterises the difference between the two products. Annually, about 500 tonnes of citrus is sold on domestic markets, and an additional 10,000 tonnes is sold for export. These figures are lower for grapes: four million kilograms for export and two million kilograms for the domestic market.

Besides oranges and tangerines, lemons are another important product group for the exporter. This season started late in September. Elena is satisfied with the quality and sizing of the fruit. “The season will probably end early, in April or May,” she expects. The lemons are mostly sold on the domestic market. There’s a lot of competition from Spain and Italy for the export.

Situated some kilometres northwest of Corinth, Memos is located in the table grape region of Greece. Besides, this region has more lemon trees than citrus region Nafplio as well. The history of family company Memos dates back 20 years, when the father of current owner Dimitros Chrysikos founded the company. “Corinth is one of the largest production regions for table grapes,” Elena says. Greek companies once built their reputations with Thompson seedless, but that variety has now been taken over by new varieties with a higher yield. “The Thompson is old, we want new, crispy varieties with a good shelf life, such as Sugar Crisp,” she explains. “We meet our growers three to four times per year, to talk about changes on the market. We want to help them switch to new varieties.”

That isn’t always easy. The younger generation sees the necessity, but they often don’t have the capital to make that investment. “We’re trying to help our growers, because we need them like they need us. Covers, for example, are a major investment, so we try to help them with that.” With the growing competition from Italy and mostly Spain, it hasn’t become any easier for the Greek in recent years. “The past three years were difficult for us. We had a good quality, but so did Italy and Spain.”

Some growers are quitting due to the competition. Other growers take over that area and become larger. Greek growers are realising it’s not an option to compete with the Spanish grapes, which flood the market from August. “We’re choosing varieties to extend our season, so that we have a lot of good quality grapes in October and November,” Elena explains.

Besides the new white varieties, coloured varieties are getting more attention as well. Red Globe and Black Crimson also see their market growing. “These are very flavourful grapes for export. Coloured grapes are getting more demand, and red grapes are preferred over the black ones.” Memos also follows the trends on the market regarding packaging. Besides bags, the grapes are also packed in top-seal.

"About 70 per cent of our activities is export, so it would be difficult to continue existing without that market,” Elena confirms the importance of international trade. Various Western European countries can be found in the list of export countries. The UK, the Netherlands and Germany are mentioned, but so are Balkan countries, such as Serbia. “We’re working with a major European retailer,” she concludes. They’re also working with a supermarket chain for the domestic market.