Australia’s production of table grapes in 2018/19 is expected to be higher due to more favourable seasonal conditions, higher yields and a larger harvest area. This forecast is almost 18 percent above last year’s estimate, which was revised down due to poor weather, reduced yields, and a late season. Australian table grape producers are increasingly focusing on the growing export market as a result of strong international demand, especially from China.

Exports comprise almost 70 percent of production in recent years and are likely to grow further with the impending removal of Chinese tariffs on table grapes under the China-Australia FTA. Table grape imports, mainly from the United States, are likely to remain the same as 2018/19, primarily due to the strengthening U.S. dollar.

Production in the previous year featured poor yields in a number of areas due to hotter  temperatures. Most grape producers in Australia are small and medium-sized family businesses, with a few large growers. Sunraysia is Australia’s largest table grape growing region, producing an estimated 80 percent of total production. Early season regions include the Northern Territory and Queensland with 70 percent of late season production from the Sunraysia region of Victoria, based at Mildura and Robinvale. 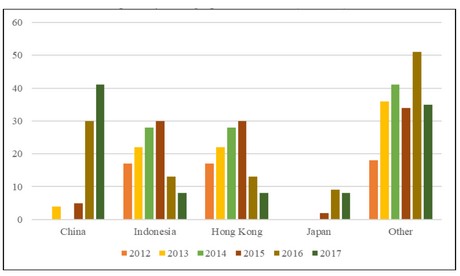