In recent years, a lot has been invested into making ripening plants more low-energy. Great strides have now been made in this. The major challenge for the future is the increasing lack of skilled ripeners, according to Adriaan van Beek of De Laat Koudetechniek. “We focused on making the ripening process less labour intensive, resulting in fewer checks, fewer inspections, and a continued automation of the process.” This way the company wants to provide a solution to this trend.

Software has played an important role in the ripening process for a while now, and that role will only become bigger. At first glance, most of the software can be compared to each other, but “the differences can be found under the bonnet.” These differences become visible in the quality of the product as it comes out of the cell. “That means you need to have a good control of the climate in the ripening cell, with no major leaps or fluctuations.” 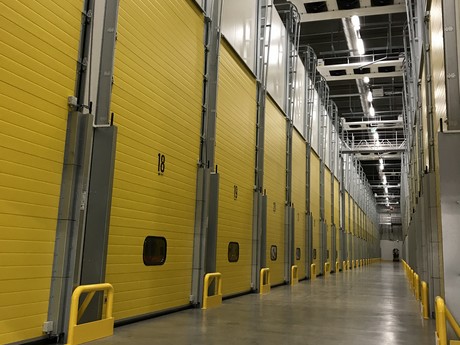 The company can test various ripening recipes with their own test unit. “We use it to research which parameters we can use to guide the ripening process without a lot of intervention from people,” he says. “Besides, there are quite a few transport movements, such as loading and unloading the chambers. Robotisation will continue in that.”

Not without ripeners
The first steps towards that far-reaching automation have already been taken. Last year in Finland, a ripening plant was taken into use where the product is looked at once or twice per week. “I won’t say we could do without the knowledge of ripeners, because you need a good entry control of the product,” Adriaan says. “But during the ripening process we want to continue automating considerably.” Technically, this is possible. “It’s absolutely possible to put all of these parameters in software with sensors,” he explains.

Would the role a company like De Laat plays change because of this? “Software has been important for a while, but not enough attention was paid to it,” Adriaan says. “However, it’s important that those who work with it, have knowledge of the product.” For De Laat’s customers the ripening cells aren’t the final product, it’s about the fruit coming out of the cells. “That’s why we have to bury ourselves in the characteristics of the product, so that we know when the product comes out best.”

Ripening on the road
Because of increasing automation, an old plan has also come up again: ripening during transport. Is this the future? “It’s possible, cooling-wise, although that also comes with a slight case of hydrophobia,” Adriaan says. The biggest challenge is logistics at sea, because once the ripening process is started, it is irreversible. “The bananas have to be placed in a cell within three days, because that’s when the container stops being suitable to control the process. If there’s a hitch in that, you’d have a problem.” At worst, the shipment is lost. That’s a risk not many companies want to run. “Some large banana companies worked on that, but they also stopped it again. It’s impossible to make concessions to the quality of the fruit.” If the logistics are good, quality doesn’t have to suffer, but a strike in the port or bad weather so the boat has to change course for another port, are risks. Besides, this requires a change in European legislation regarding the presence of ethylene during transport.

Ripening exotics even more complex
Automation will mostly continue in the ripening of bananas. To ripen exotics, too many uncertainties are still in play. “For exotics, the differences between batches or small packing units are so big, a sorting installation would be needed,” Adriaan says. The differences upon arrival are so big that it’s impossible to fix these differences in a few days. “That would result in major differences in ripeness,” he explains. “The fact remains that consumers can’t tell whether a product is ripe or not just by looking at it. A bigger effort could be made in that.”

Just as with exotics, the packaging influences the ripening process of bananas. “It’s been mentioned before, but it’s undoubtedly happening: a different packaging,” Adriaan expects. “This is talked about more and more often.” For the ripening, it means the air flow along the product would change. “If this changes, the ripening process will also change. Our ripening systems have already been adjusted to that in recent years, so that more or less air can pass through the cell.”

Renovation effort in Europe
Internationally, more and more attention is paid to ripening exotics. Adriaan visited an avocado ripening plant during a visit to China. “They’re often also lacking in knowledge over there, so things sometimes go very wrong,” he has seen. “But demand is increasing there as well.” Developments in countries like China and India are coming quickly. “Some places are doing well, others make mistakes, but in the end, it will all turn out well.”

This year, De Laat finished up their first project in China. The 18 cells, two high, were built for a large Chinese company that wants to supply premium products. When Adriaan asked the owner if the installation functioned to their satisfaction, the Chinese customer answered: “I don’t know, but the fruit is nice and shiny.” Although these distant markets still have many uncertainties regarding the possibilities, opportunities can be found in these countries. “The European market is quite saturated, even though some of the installations are 15 to 20 years old,” Adriaan explains. These ripening systems could use a renovation. “I have a German customer whose system is 25 years old, and which is still operating, but if you could realise a decrease in energy usage of 35 per cent, it concerns significant amounts of money.”