"Brazil is 16th in the ranking of the largest exporters of fruit in the world (the calculated based on FAO data, United Nations Food and Agriculture Organization and Agriculture). The United States and Ecuador, for example, record sales four times higher than Brazil's. This is based on the information collected from the export of the main national fruits such as mango, melon, lime/lemon, grapes, papaya, watermelon, banana and apples”, HF Brasil reported in their most recent magazine. 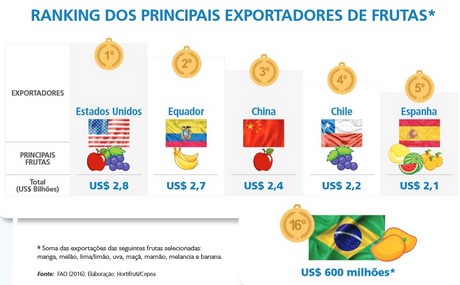 According to HF Brasil the country still has the potential to become more competitive and increase its position on the list. “Brazil has a high production in some of the national fruits, plus good quality because of the climate and proper management, and they're offered at attractive prices. However, there are some challenges for exporters as well, such as a weak infrastructure, not enough fruit promotion in general and the lack of bilateral agreements that limit their competitiveness.”

By analyzing some fruits, the conclusions are that Brazil is doing a good job in terms of mango, melon and papaya. However, in the case of bananas and apples the international consumption level is still low. HF Brasil has given an overview in the magazine of the analysis of the eight most exported fruits by Brazil, which are papaya, mango, melon, limes, watermelon, grapes, apples, and bananas.

“The dollar is one of the economic variables that most influences the economic profitability of the Brazilian fruit exports. Its variability in recent years has been significant and this raises uncertainties about the future profitability for exporters”. It’s explained in the magazine that the biggest question is whether the Real can appreciate to the point of negatively impacting foreign trade. Shortly after the second round of elections, the commercial dollar was traded at R $ 3.60. In general, institutions forecasting the US currency do not project exchange rates below R $ 3.00 for the short term. However, there are expectations in the market of lower exchange rates in the coming weeks and of a more valuable Real in a few months - from 2019 on for example.

Click here to view more about the competitiveness of the Brazilian market.