Actinidia deliciosa, the dominant kiwi species, is an important crop in northern Greece. In 2016, the total production was 182,589 tons and the total harvested area was 7,710 ha (FAOSTAT 2018). 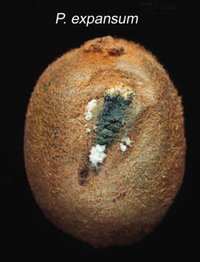 In March 2017, a survey was conducted to assess the post-harvest losses of cold-stored kiwis in Chrysoupoli, Prefecture of Kavala, Greece. Most of the diseased fruits showed evident sign of rot. Diseased fruit presented soft, watery, pale yellow to light brown lesions on the surface with masses of blue-green sporulation. Fungal isolations were performed on potato dextrose agar by the researchers of the Alexander Technological Educational Institute of Thessaloniki.

Plates were incubated at 23°C for 7 days and colonies rapidly grew that were velvety to powdery and green on the surface. Based on morphological characteristics, the pathogen was identified as Penicillium expansum and the identification of the species was further confirmed isolating the genomic DNA of the five isolates. Corresponding nucleotide sequences were deposited in GenBank (accession nos. MH010968 to MH010972 and MH040781 to MH040785) and BLASTn analysis revealed a 100% identity with P. expansum (GenBank MG770360 and LT898269, respectively).

After the pathogen was identified, kiwis were surface sterilized by dipping them in a 0.1% chlorine solution for 10 min, allowed to dry in a laminar flow hood and wounded with a flamed knife of 6 mm in diameter; a 6-mm-diameter mycelial disk of fungus was placed over each wound. There were 10 inoculated and 10 control fruits (similarly wounded and inoculated with an agar disk without mycelium) left to incubate at room temperature (20 to 23°C) for 7 days. Koch's postulates were satisfied after reisolating the fungus from inoculated fruit that developed symptoms similar to those observed on fruit collected from cold storage.