Every year there is something new and innovative in the Chinese produce and E-commerce markets, making it an exciting place for retail, according to Loren Zhao, co-founder of Chinese company Fruitday, speaking at last week's Amsterdam Produce Summit..

The business started 10 years ago, and Loren Zhao told the Amsterdam Produce Summit that it is still upgrading, to meet the growing and changing demand within the country. 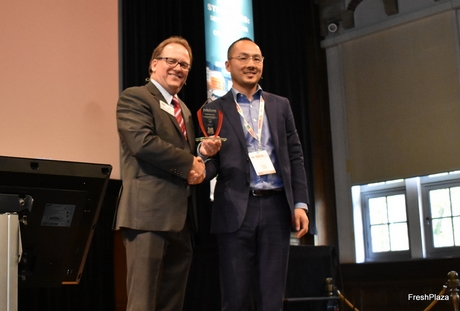 "10 years ago everyone thought that we were crazy because no-one had delivered fresh fruit to customer's homes before in China," he said. "But after five years everyone was doing it and five years later, right now, we are considered as traditional. We are trying to upgrade our services in China because we want to meet the demand from the new retailers and the brands that want to keep expanding their business in China."

Fruitday has just purchased an online shop called "City Shop", and Mr Zhao says while it is not quite the size of other E-Commerce players such as JD.com and the Alibaba Group, it can have its advantages.

"We are happy because we don't have to compete with Alibaba and JD, because on the retail side, we supply them products to help them and other E-commerce (companies) to sell their fresh produce," Mr Zhao said. "But on the other side, we purchased City Shop, a traditional hypermarket in China to focus on the premium imports of food and fresh produce. City Shop has been in China for longer than Fruit Day. When we thought about why we should by City Shop there was a very important reason. We see in the future that we cannot just rely on the E-commerce; the business growth should be with both the online and offline companies together. Also, I think the value since we purchased it has almost tripled."

Mr Zhao says it is important to give customers the convenience of choosing the way in which they make purchases. Fruitday wants to create a few scenarios such as online ordering and delivering, to physically entering a City Shop or fresh produce stores, as well as vending machines.

But the company is also focussing on supply chain, through its newly launched business "Freshbridge", Mr Zhao says it is the "next generation" of value-add packing, and with an international programme, retailers have been coming to them are coming to Fruitday because they can provide a service.

"The service is not just targeted to the retailers," he said. "The repacking service (for example) is like a packhouse in an orchard, to sort the different sizes of the fruit. But in New Zealand and other markets they don't have enough labour to pack different packages for different markets. They export to China, to Japan, to U.S.A and to Europe and they use different packages, but they don't have the extra labour cost to do that. Maybe they can send bins into the market and in the market have the service provider help them repack the fruit."

But there is a lot more room for growth on the back of new innovations. Mr Zhao points out some trends in China, that could lead the way for other markets in the rest of the world. The first is the consumption upgrade in quality, where the consumer does not want a cheap product, but wants to pay more for a premium product to feel satisfied.

There has also been a switch to self-serve automated shopping, with stores not serviced by humans, but face recognition technology that allows customers to conduct transactions more swiftly. Mr Zhao also noted a largely cashless society.

"Most of the Chinese people have a mobile payWave account like a WeChat and Alipay," he said. "When I am working in Shanghai or the other cities, I don't need to use cash. We can use mobile payment everywhere, even if we want to buy a drink at the street stand, we just scan a QR code. We can use a mobile phone to scan and get around the metro, or the bus, or a taxi. Normally, if you want to buy a ticket, you have to go and line up at a ticket office, and I think that is an inconvenience. In China, you just use a mobile phone."

He says when it comes to new businesses many investors are becoming more attracted to people born after 1990, as they can bring new ideas and new technologies to the table, which helps stabilise the company's long-term future. There is also a major transition towards ready to eat or ready to cook food. Mr Zhao even suggests that refrigerators may not be needed in the near future, with customers ordering their food so fresh it arrives in 30 minutes - eliminating the need for regular trips to the store.

The Fruitday co-founder adds that there is a major potential for companies to shift their focus away from the major Chinese cities, or Tier 1 markets and look for alternatives.

"When we think of Tier 1 in China, usually we have more than 20 million population," Mr Zhao said. "With Tier 2, the average population is 10 million per city. Even the tier 3 city has more than 5 million people. That's why we want to move to tiers 2 and 3 because most of the fruit in tier one will sell to the other tiers anyway, so why not just go direct? I think 80 per cent of the fruit that goes into China went to the (Tier 1) wholesale market in Shanghai. When a lot of fruit goes to the same market there is a pressure for the prices. For example, last year ahead of Chinese New Year, every day there was 400 containers of cherries. This meant the price dropped 80 RMB to 50 RMB and even 20RMB."

There is also an opportunity for brands to improve their marketing, especially for importers and wholesalers to educate consumers on how to cook and consumer the product. Mr Zhao recalls this method working for Zespri, who ran an effective campaign at retail level in 20 cities, through a social network, so consumers could remember and understand the brand.

But he sees a significant shift with major internet and mobile players partnering with retailers, including fresh produce, particularly in the E-commerce space that could soon create a completely new system.

"The reason is they have the traffic, they have 100's of millions of customers on their platform, but they can't get money from them," Mr Zhao said. "For most of the E-commerce companies, we just don't have enough traffic. So, if we can combine the company with the traffic, put them together, we can create a new E-commerce system."