The harvest of the new season started exceptionally early this year. Because of the warm weather, however, colouring fell a bit behind. Quality is generally good, according to Miet Gerrits of Gerrits Fruit.

Gerrit Fruit from Belgium has been active in the top fruit sectors for three generations, and the company has been run by Sven Roosen and Miet Gerrits since 2005. “We’re traditionally a fruit production company. My husband and I have started our own trademark and a sorting company. We now sort and pack a lot for third parties,” Miet says. “Because of this, we are in control of the entire production process. Both the production and the harvest, as well as storage, sorting, packing and delivery are now done under our own management.” 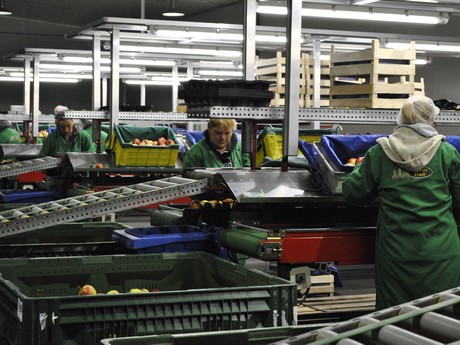 Their own apples and pears are grown on an area of 40 hectares, 35 of which are pears and five are apples. When we visit the company in the Haspengouw fruit region at the beginning of October, only the final Jonagold apples are still on the trees, ready to be picked. “It’s time to stop. The final apples have had too much sun. As a result of the favourable weather circumstances, the season started exceptionally early this year. Although the pear sizes were smaller on average we’re seeing lots of large sizes in apples.” According to her, the colouring of the apples improved later in the season, and sizes also recovered fairly well, resulting in more kilograms than initially thought. “In short, we can speak of a good quality and regular volumes.”

Demand falling behind
The cold stores of Gerrits Fruit are also full. The company doesn’t do their own long-term storage. After sorting and packing, the apples and pears are immediately shipped to destinations throughout Europe. Miet expects the cold stores to be empty before the end of the year. “We can now only hope the market will get going a bit better, because it’s been difficult up till now. The supermarkets are still carrying a lot of foreign fruit. Yet there wasn’t much of an overlap this year. The Belgian stocks of apples and pears were as good as empty, which should be good for trade. There was some demand at first, but it’s very calm now.” 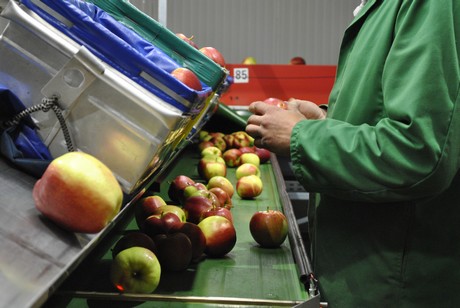 Since the takeover of Sven and Miet in 2005, Gerrits Fruit has grown considerably. The production was expanded from 16 to 40 hectares. Gerrits Fruit is a member of producers’ organisation New Green. This association was founded ten years ago, and about 60 growers are now members, with a combined production area of more than 1,000 hectares. The fruit is traded using a pooling system. The start of the sorting company in particular came with an increase. The company cools and sorts its own fruit and that of third parties, and they handle between 4,000 and 6,000 tonnes of apples and pears each year. The top fruit is sorted per size and quality and packed as per the customer’s wishes.

“Yet it continues to be a challenge to remain a healthy company. The export ban to Russia was a blow, and we’ve noticed more competition. The production process of fruit is more expensive in Belgium than in emerging countries in Eastern Europe. We’re trying to positively look to the future, and to seize opportunities. We’ll soon start offering our apples and pears online via beedrop.be as well, this is a platform for local products. Besides, we also want to take another look at the options for selling at the farm again. In the past, the company had a farm shop, and last summer we did good business selling cherries from home. Perhaps we’ll do more with this in future.”