Interpoma a window on the future of the apple sector

The many people who had visited Interpoma already on the first morning of the fair (November 15th, 2018) confirmed the success of the event. The fair dedicated to apples attracts the interest of a vast audience of domestic and foreign producers as well as traders. This is because varietal innovations and solutions that help the sector are on display all in the same place. 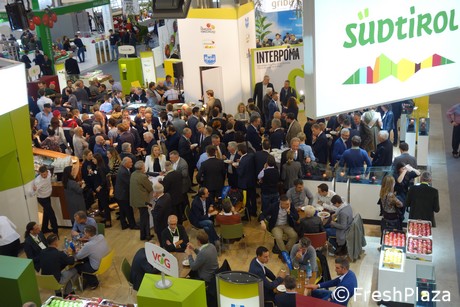 The fair is also the perfect chance to see where the apple sector is headed. Trends seem to be very clear: people tend to prefer sustainable varieties that resist the main phytosanitary problems.

A lot of work is also being carried out on diversification in terms of flavor, texture, internal and external color. What only seemed to be peculiarities a few years ago, such as for example apples with a red flesh, are now finding their place on the market.

The Red Moon® brand by Vivai Braun, for example, includes two red-fleshed varieties. "Around one thousand tons are available for now. When we explain to consumers that red-fleshed apples have a high vitamin C and anthocyanin content, they fly off the shelf. It has been a winning bet for us," explains Jürgen Braun.

Red Moon® is also used to make juice (perfect to make cocktails or on its own) or chips. Below: fresh red apple slices. 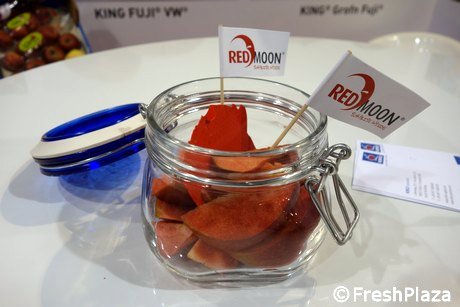 The large consortia have proven to be protagonists of the ongoing varietal innovation with the purpose of guaranteeing an income to their partners. Consorzio Vi.P Val Venosta reports that they "sell apples on 50 markets, all of which are different. There is no single apple that works for everyone. We are working on new varieties and want to inform producers so we can decide together what to plant over the next few years. The cost/benefit ratio of each new cultivar must always be assessed, as new varieties only make sense when they are functional to producer needs and cost containment," adds sales promotions manager Benjamin Laimer. 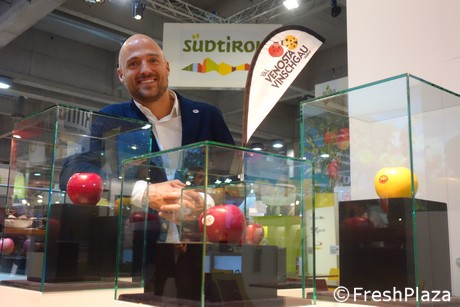 Benjamin Laimer (VI.P Val Venosta) among the displays with which the consortium presented 14 new products, including the new Yello® (on the right).

Melinda reports something similar: "we aim at planting 200 thousand plants of the new varieties every year, which should be fully productive in 2025. All new varieties have been tested over two years. We want our producers to have valid alternatives to the classic Golden apple," stated marketing manager Andrea Fedrizzi. 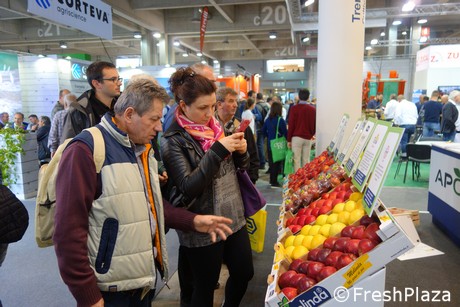 The new Melinda varieties sparked a lot of interest.

The club formula, started with the famous Pink Lady®  variety, is still convincing when it comes to profitability and effectiveness. Very strict parameters are established for club varieties to brand the product. In addition, the expansion of orchards is planned over time.

Breeder and nursery gardener stalls where the various cultivars - both the famous and the most recent ones - are presented are very popular. People were particularly interested in both the varieties and the events organised by the single stands. 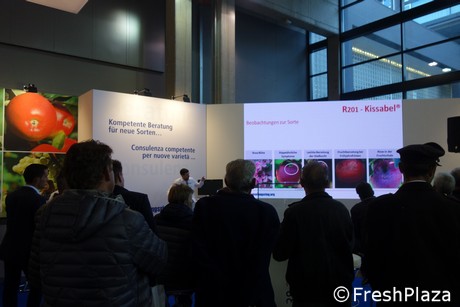 Above and below, people attending the events organised by the single stands 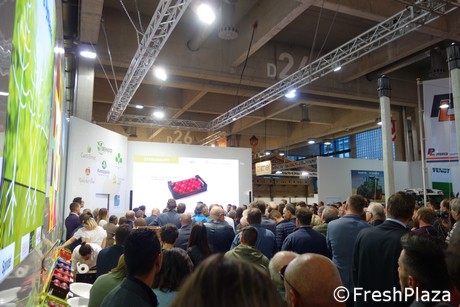 Some nurseries branch out all over the world with dozens of varieties: the parent company of Dalival is located in France, but it works in both hemispheres and with over 70 varieties. According to coordinator and sales manager Gerhard Gius, mechanization will increase over the next 20 years with the introduction of multi-resistant varieties and the creation of stricter protocols and specifications. 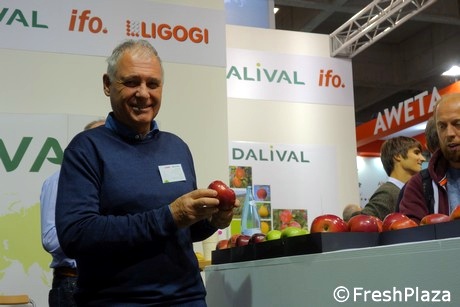 As regards the flavor, "as the Asian countries tend to prefer less acidic apples so sweeter varieties will be developed."