Opportunities for Greek grapes in October/November

If the increasing Spanish competition hadn’t startled the Greek grape growers yet, last season would have been a wake-up call for the sector. Investments are necessary to remain competitive in the near future: new varieties, better irrigation and, most of all, covers. But how to do this in a country in which the consequences of the crisis can still be felt? George Saliaris-Fasseas, founder of Greek Grape Company, took the bull by the horns and personally bought a piece of land.

George Saliaris-Fasseas (left) and his colleague on the vineyard.

“It was the worst season ever,” the trader, who has been active in the sector for 27 years, looks back on last summer. “In July, we had 15 days of rain in a row, so that moulds could easily grow. It stayed warm and humid after that, so mildew and botrytis became a major problem.” Of the 124,000 tonnes of grapes produced in the Corinth region, only 30,000 tonnes were exported. George worked in the UK for a British company for year, for which he took care of import for Tesco, and he knows the Greek grape sector like no other. 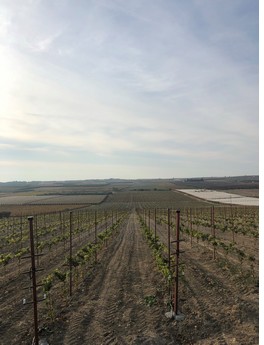 Opportunities with late season
“Thompson is a good variety, but it has a low yield and high labour intensity,” George says. “We need new varieties that can handle a high atmospheric humidity and be more productive.” These varieties are available, but it only becomes interesting for breeders when areas of minimum ten hectares can be planted. Agricultural land in Greece is very small as it has been traditionally divided from generation to generation and currently it is owned by many small growers. There are  ore than 3.000 growers. That doesn’t exactly make the country an appealing market for breeders.

George saw opportunities for the Greek grape sector, and decided to personally invest in grape production. His company bought a piece of land in the north of the country, near Thessaloniki, and started cultivating to the latest standards. “Greece, geographically is the final country that grapes can be produced in the European season,” he explains. He’s therefore aiming for a harvest in October and November and to finish sales in December when South Africa sales hit the markets. The owned area currently cultivated is 20.2 hectares of covered grape production.

“We only planted late new varieties,” he continues. They decided to plant white varieties Sweet Globe and Sugar Crisp, and the red varieties Sweet Celebration and Jack Salute. “The largest share is Sugar Crisp.” George hopes to start harvesting and exporting the first grapes next year. The focus is on the UK and the Netherlands. “We need more production, that’s why I planted these varieties together with three other growers.” 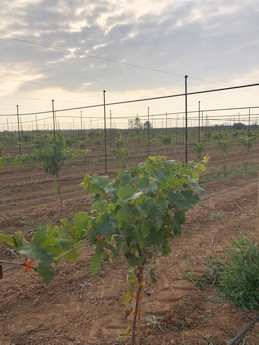 Besides new varieties and covers, against both rain and hail, George also made some ‘invisible’ investments. The field was equipped with a modern irrigation system, and the irrigation can now be taken care of per individual plot. Additionally, he uses data to decide, for example, how much manure is needed for a plant. Because of this, he’s ahead of the Greek growers.

“We need data to understand what a plant requires. Climate change is a fact, 2018 was terrible for everyone, but we can see trends when using data,” he explains. Although the availability of water isn’t a challenge around his field, he invested in an irrigation system for deserts. This way, George is hoping to save money and build a more sustainable operation.

Efficiency and growing what the market asks for
“We work with supermarkets to find out what they expect,” George continues. That way, he hopes to stay in contact with the consumers. “The new generation of consumers want to know more about the products. They want more transparency. We, from Greek Grape Company want to select the growers and the production for the consumers.”

“Five years ago, customers called us to buy Thompson grapes, nowadays there’s more competition from Spain,” George says. According to him, the Greek sector has two options: “Slowly dying or innovating and surviving.” He has clearly chosen the second option by investing in the production and in the people. “We have to train people to increase efficiency and production.” The new varieties are needed to supply constant quality at lower costs. He’s positive but fair about the future. “Growers with small areas of, for example, 0.4 hectares will be in more trouble,” he concludes. But with the right investments and for companies with larger areas, the future looks much brighter.