The season for Dutch top fruit started a few weeks ago. For most varieties, such as Elstar and Conference pears, the new season started in week 40. The first Kanzi and Migo were on the shelves in week 40. This year, FruitMasters is dedicated to the promotion of Migo. This pear is seen as an innovation in the segment. Leonard Kampschöer talks about the pear that’s now in its third market year. Additionally, he also looks at the top fruit season in general, and the harvest estimates that have now been adjusted for large parts of Europe. 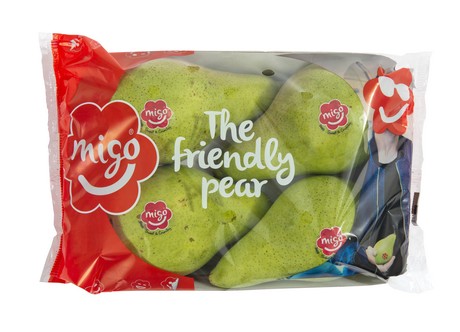 In August, WAPA presented the harvest estimates for the European top fruit season. Both the apple and pear harvests were estimated to be larger than last year. The figures that were presented at the time have now been adjusted downwards a bit. “At the start of the season, estimates for pears were high, but this has been adjusted because of the dry weather,” Leonard says. FruitMasters expects a normal pear harvest this year. Compared to the first estimates, the harvest figure has been adjusted downwards by about ten per cent. The programmes can be filled until about July 2019, so that it’ll be a good season. Sizing of the Conference is good, and they’re not too rough. “The pears have a greener, smoother skin,” Leonard explains. 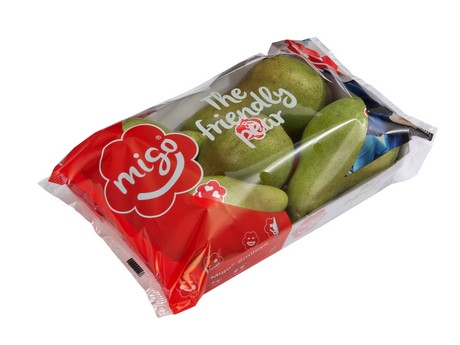 The Netherlands: a water country
“We’re fortunate that we can irrigate about 80 per cent of the area in the Netherlands. Because of this, we have a good quality, nationally. The Zeeland and Limburg regions show the consequences of the dry weather a bit more. Most of FruitMasters’ members are in the watery areas. That’s why we expect a good quality of the fruit with high sugar contents and lots of colour,” he says. During the dry summer weeks, water from the IJsselmeer was led into the rivers. That’s when it became clear just how good the network of rivers is in the Netherlands. “The network and management of water in the Netherlands is something to be proud of. It could perhaps be better in some regions, where they only have salt water, but people are already working on that.”

The production figures have also been adjusted for apples because of the dry weather. However, the Dutch fruit is large in contrast with the European fruit. For Elstar, the estimate has been adjusted downwards by 15 per cent. For the regions that were able to irrigate, pear sizes are large (mostly sizes 60-75). “The fruit coloured well, and the season was started ten days earlier,” according to Leonard. Production figures were adjusted for a regular harvest throughout Western Europe. Poland is deciding in WAPA’s figures, but Leonard mentions the major differences in the estimates of two official authorities in Poland. A difference of 1.4 billion kilograms of apples was reported. 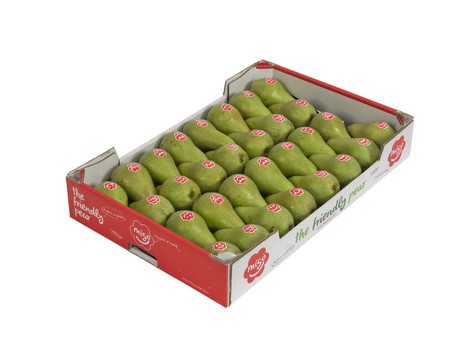 Migo: the pear for Mi on the GO
“Within FruitMasters, we have a good mix of top fruit with traditional varieties supplemented with new varieties that suit consumers’ tastes,” Leonard continues. “We have a good balance between club varieties and free varieties.” FruitMasters’ club varieties include Rubens, Junami, Kanzi and Migo. This is the third year the Migo pear will be available, and prospects are promising. “Last year, we wanted to continue until June, but we were already sold out late in March,” Leonard reminisces. The volume has been doubled for this year.

The ‘pear for on the go’ is grown in the Netherlands, Belgium, Germany and the UK. FruitMasters co-owns and markets this club variety via EFC. In Belgium, the pear is marketed by BelOrta. “The Migo is getting more and more attention on the European market,” Leonard says. This is supported by various campaigns to increase the Migo’s familiarity. Room on the shelves next to Conference and other pear varieties is limited, but Migo appeals to a new target audience because it’s a new pear with a sweet flavour that doesn’t drip. Research shows ‘pear haters’ are willing to buy this pear because it doesn’t leak while eating it. “An easy pear for on the go. This doesn’t result in cannibalism within the pear segment.” 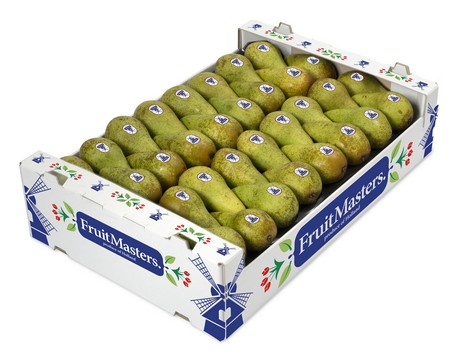 Conference breaks through in China
For now, FruitMasters mostly invests in the development of the European market for Migo, but export to far-off destinations isn’t ruled out in the long term. Conference is shipped globally, and thanks to the export licence for China, the pear could already be found on that market for some years now. The Chinese market for this pear is growing slowly but steadily. “Conference is appreciated for its flavour more and more in China. We’re seeing the Conference breaking through,” Leonard says. Because Conference pears have a green peel this year, their quality seamlessly meets Chinese demand.

Export to far-off destinations is being developed further, and countries like Vietnam and Brazil are potential markets. Leonard isn’t worried about geopolitical tensions. “The tariffs and the like implemented by Trump cause a lot of unrest on the market, but it offers opportunities and openings on other markets for us.” The coming Brexit is causing just as much uncertainty in trade. “We have to anticipate it, and make sure we can handle the flow of documents, but there’s not much else we can do,” he continues. “I hope the EU is clever enough to draw up a free trade agreement with the British, because they’re an important buyer of European fruit. You shouldn’t fight with your customers.”

This article was first published in the Dutch magazine Primeur.