"Fresh mushroom market has great potential for growth in Spain"

Ayecue, the fresh division of the Riberebro group, has managed to increase the supply of fresh mushrooms with a new range of organic mushrooms, which features the most consumed varieties in Spain, such as white mushrooms, portobello mushrooms, oyster mushrooms and shiitake mushrooms.

"About a month ago, we started selling the first organic mushrooms under the Riofresh brand, which we presented at Fruit Attraction, and the truth is that the prospects are great. There are many distribution chains interested, and we are working with them on the pre-Christmas campaign. This is a time when there is a higher demand for special products with the capacity to add dynamism to the shelves. From this time, we are ready to supply our customers with organic mushrooms without interruption all year round," explains Aitor Sanzol, commercial director of Ayecue. 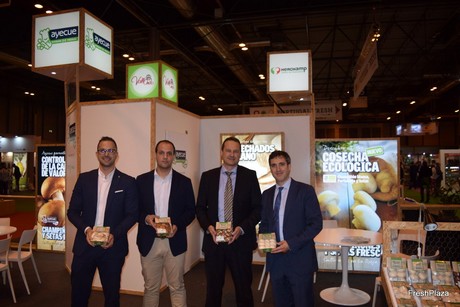 Commercial team of Ayecue at Fruit Attraction, where they presented the new range of organic mushrooms. On the right, Aitor Sanzol.

Grupo Riberebro is one of the largest mushroom producers in Europe. It produces around 52 million kilos per year, with an important part of this production going to the canning industry. The La Rioja-based firm integrates the entire mushroom value chain into its production structure. It has its own Phase III compost plant, climate-controlled crops, temperature-controlled packaging infrastructures and national and international distribution capacity. The control of the value chain and the wide range of products on offer make Ayecue a leading name in its sector.

85% of Ayecue's sales are intended for the domestic market, and the rest is exported to neighboring countries such as Morocco, Portugal, France, Belgium and even the Netherlands. "We must bear in mind that mushrooms are delicate products that need to be placed on the shelves in the shortest possible time after their harvest, keeping the cold chain at optimum temperatures for the product. That is why we do not ship to farther destinations. If some day we find logistics solutions or packaging that allow us to go further, we could expand to new markets," he says. 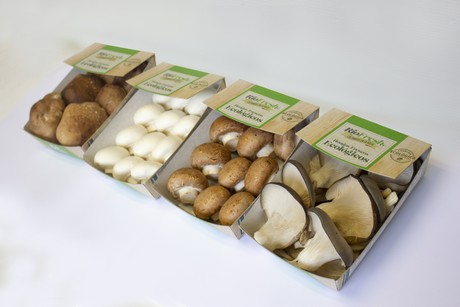 According to Aitor Sanzol, "the canning market is more international, while the fresh market still has a lot of potential to grow in Spain, since there is still a long way to go to reach the per capita consumption levels of other neighboring countries. In the Spanish market, each customer looks for different kinds of mushrooms, sizes and packaging, and with very demanding standards, but in general, in Europe, it is possible to work in a more standardized way."

The organic mushrooms that Ayecue is launching are grown in La Rioja on organic substrates, without any artificial fertilizers. They are harvested by hand, adhering to traditional methods. "We have developed natural forms of control and growth to guarantee the supply of mushrooms and organic mushrooms of the highest quality. The production processes pass the strictest controls and meet the standards of organic farming certifications in the country and in the European Union," says Aitor.

This range of organic mushrooms is presented in new cardboard trays which are 100% recyclable, which ensure the protection of the mushrooms for longer, keeping their organoleptic qualities intact.

"Organic products are an unstoppable global trend, but also reasonable. Today we have the need to offer consumers increasingly healthier and more sustainable products. Mushrooms are also a superfood with many functional properties. In the last edition of Fruit Attraction, one of the hottest topics was the development of organic products. We have to adapt to these consumer demands."