California’s navel orange season is looking to be the opposite of last year’s season.

“We’ve got lots of small oranges in this year. Last year’s crop caused a heavier set and we’ve had an unusually warm fall. It’s been hot here in the valley,” says Randy Jacobson of Orange Cove, Ca.-based Cecelia Packing Corp. “We’ve had virtually no rain on top of that so it’s very dry. Normally there’s been rain by now and there’s nothing a plant likes more than natural rain.”

While Jacobson says there’s some mixed-size fruit, the majority is small and very small. “It’s the smallest we’ve seen in quite a few years,” says Jacobson, noting the season started a touch early on October 22 this year.

Last year’s season notably had more large fruit available and not much small fruit. It’s undetermined for now whether this year’s overall volume is larger than 2017’s. “If you go by the fruit count on the trees compared to last year, it’s a much larger volume,” says Jacobson. “But if you sit back and try and determine what’s actually going to make it into a box, it may be slightly bigger. If the fruit doesn’t grow, it may never see a box.” 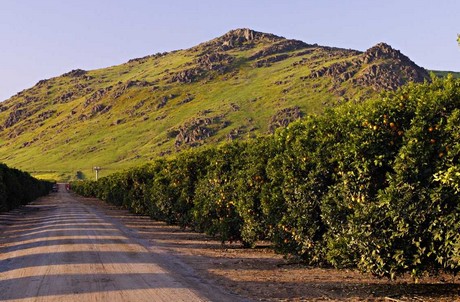 The import effect
And while Florida is also shipping oranges right now, Jacobson notes that the imported citrus season is overlapping into the domestic season. “We have the hangover of the import citrus programs from the summer—Chile in particular. They clogged things up a bit this year,” says Jacobson. “They had a little bigger fruit than we did which is a benefit for them but we’re still waiting for them to clear the market. It’s slowed things down a little bit.”

That puts demand rather light currently for oranges, which generally sees less demand at this time of year. And sizing factors into that demand as well. “For example, some in the foodservice sector are concerned about things like costs per serving on the smaller fruit. However that’s not a real large portion of our business,” adds Jacobson.

Holiday pick up?
A boost in demand however isn’t likely to come until Christmas. While ads are in place right now, the upcoming Thanksgiving season isn’t necessarily a citrus holiday. “And Christmas is a little better but it’s not like it used to be,” says Jacobson. “I don’t know if any fruit category sees the lift they saw 25 years ago. It just doesn’t happen.”

Altogether that makes for good pricing on the larger fruit right now. “Smaller fruit is looking for its own level in pricing. I don’t think we’ve found it yet,” says Jacobson. “It’s come off substantially since we started and I don’t know where it ends. And compared to last year, prices on the larger sizes are higher and the smaller sizes are lower. We had the inverse last year with not much small fruit so the smaller sizes were worth more than larger sizes.”