Central and mountainous regions of Mexico are experiencing freezing temperatures this week as a deep southward dip in the jet stream makes its way well south of the border, drawing colder air from the north. The states of Chihuahua, Coahuila, Durango, San Luis Potosi, and Guanajuato are seeing the coldest temperatures, with freezing conditions likely over the next few days, particularly in elevated areas.

There is still some tomato production in these areas, and growers say it will affect the crop badly there. "For tomatoes, you only need two hours of below freezing temperatures to damage the crop and if it is over six hours, you lose it," explained Alberto Pedraza of El Dorado Growers. "This week, we are expecting freezing overnight temperatures from Tuesday through Thursday. It is very deep and very strong and will subsequently result in a 48 hour period of cold temperatures in San Luis Potosi, Guanajuato and Queretaro."

He added that the lack of growers with greenhouses means the tomato season will be over for the year here, a little earlier than normal. "The season will end sooner for this region and growers will be picking whatever they can and whatever is left in the fields will be lost. 95 percent of growers do not have temperature controlled greenhouses there, rather only a shade cover. There will likely be a fair amount of losses for these growers." 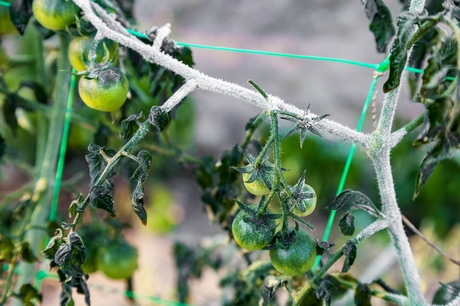 Gap expected between regions
Pedraza also noted that freezes in November are not unusual in these areas, it's just that the freeze came a bit earlier than normal. Additionally, there is a slight gap between this eastern region and the start of the main production areas in the west of the country due to hurricane activity there. Suppliers say this will likely create a tight market over the next few weeks.

"The market is going to be ugly for the next month or so," he surmised. "Sinaloa is late this year because the region was affected by weather and growers had to re-plant. That is why prices are higher and will remain high until we see more volume from the winter crop."

Bulk of tomato and vegetable production not affected
Fortunately for the US market, the bulk of production at this time of year is centered along the strip of land between the Sierra Madre Occidental and the west coast, in states such as Sonora and Sinaloa. The major growing areas are not experiencing the deep low temperatures that central parts are facing.

"Many of the traditional vegetable items are coming out of Culiacan right now, including bell peppers, cucumbers and tomatoes," noted TJ Bauer of Can Am Pepper. "There is no cold weather in this region and highs remain in the 80s while lows are only getting down to the upper 50s. The regions affected by the freezing weather hold minimal production, especially coming into November. The major volumes of tomatoes will begin in Sinaloa from early December. Any delay from these areas is due to the tropical storm activity that has occurred over the last couple of months and not this current cold wave."

The colder weather should remain until the end of the week, with lows getting progressively warmer as the week progresses.