Last Saturday evening saw the big celebration of Vergro's 50th anniversary. More than 400 guests celebrated this auspicious occasion with this Belgian exporting company in the town of Meulebeke, Belgium.

After the reception, a jubilee show was given. Here, sports reporters, Martial and Noël, took a humorous look at Vegro's various locations. This was presented as if it cycling tour - the 'Vergro Classic'.

It became a race against the clock with only one winner. The Vergro story came to life in the different stages - from the start up to where the business presently finds itself.

Firstly, the company's founders, Hendrik Vermeersch and Eric Noppe, were invited to the stage. 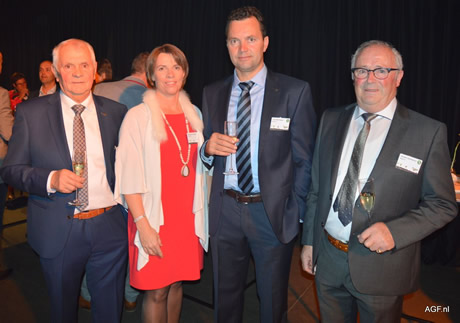 The business was set up by Hendrik Vermeersch in December 1968. After a few months, he was joined by Eric Noppe. Two young farmers who initially supplied vegetables to the industry. For example, to frozen foods and canning factories.

Quickly, they started exporting vegetables to France. They visited Paris every week. Exports were later expanded to Germany and England. Currently, the company is one of the largest fresh fruit and vegetable exporters in Belgium. They cater to the fresh market and the industry. Vergro exports to 26 countries and has branches in Meulebeke, Sint-Truiden, and Sint-Katelijne-Waver.

The founders were asked what the secret is to the two of them working together successfully. The answer - they have been friends, neighbors, and hard workers since childhood. Humility can also be added to this mix.

Funnily enough, both men mentioned that 'their wives were not involved in the business. They were, however, in the background, lending support. This ensured that the partnership always stood strong.'

The fact that Hendrik was involved in a very serious accident about 28 years ago was also highlighted. He was on his way to clients in France when he was in a crash with another car. His injuries put him out of commission for many months.

When they started the business, Hendrik and Eric never thought it would become as big as it has. Here, they also mentioned the staff and suppliers motivation. Without them, this growth would not have been possible.

Meulebeke's Mayor, Dirk Verwilst, is pleased that a business like Vergro in established in his town. He calls Meulebeke the 'vegetable garden of Europe'. Vergro provides jobs in his town. Verwilst mentioned the good cooperation of the company. For example, Vergro helped invest in the municipal infrastructure by laying an access road. The company also supports local associations.

The business expanded, even more, when Eric's son, Dominiek, joined the company in 1994. Dominiek had been interested in the business since he was a child. As a youngster, he helped out with everything that was happening. Later, he helped load the trucks. He, of course, went along to deliver the loads.

With Dominiek's arrival, the export markets were further expanded to Russia and India. Dominiek says his father gives him a lot of freedom and Dominiek developed into the company's director. Now his father is mostly his private chauffeur - Eric still enjoys accompanying Dominiek on visits to clients and suppliers.

Dominiek emphasizes that, at the office, the relationship between employees and directors is equal. Dominiek's desk is among those of his employees. In this way, he has the most affinity with the shop floor. 'Doing it together' is one of the company's keywords.

In 2006, Alexandra, Dominiek's sister also joined the business. She mostly deals with HRM and administrative matters. Their other sister, Dorothé, has shares in the company but does not, as yet, work there. Dominiek's wife, Siska, however, does. She is responsible for the invoicing.

Over the years, Vergro acquired several other Belgian companies in the same sector. These take-overs have strengthened the business. In this way, Roger Vanmarcke & Zn, was bought out. They did a lot of exports to Germany. It was nerve-wracking to see how the German clients would react to this.

Dominiek accompanied Curd Vanmarcke to meet these clients, as well as a big client in Krefeld, Germany. He reassured them that the partnerships would continue after the take-over. He won their trust. They were not even home yet before the first truckload of lettuce had been ordered.

Beside Roger Vanmarcke & Zn, Vergro acquired Everaerts, Devleeschouwer NV and, more recently, D&G. These buy-outs ensure further expansion throughout the world. The take-over of the cultivation company, D&G Fruit, was primarily done because English supermarkets really wanted to buy directly from the farmers.

Are there any more acquisitions on the cards for Vergro? According to Dominiek, take-overs are not an aim in themselves. He says they are continually looking at what the market is doing and where the company can be strengthened. Which strategic decisions are you going to make? One does not control the market. Rejecting a business could also be a strategic move. He says the most important thing to do is to listen to what the market is doing. Then, consider that when making a decision.

Different clients from countries such as India, Norway, Russia, and England sent their congratulations to Vergro via video messages.

What are Vergro's trump cards? The good cooperation with the Belgian auction houses is one of them. Vergro has direct lines to growers. They also collect their products straight from them and come to agreements about delivery times. In this way, they get first-hand information. These short lines ensure efficient business operations. Here, administrative processing is simply done through the auction houses.

Products can, therefore, be delivered to clients, at their freshest. Vergro has their own quality brand - ‘€ureka Fresh’. Truss, single and beefsteak tomatoes, apples, pears, leeks, and aubergines are supplied under this label.

In 2014, the business premises in Meulebeke was enlarged. This was badly needed as the warehouses were chock-and-block. There was just no more space. The current business premises provides room for further growth.

The location at Sint-Truiden is currently being expanded. Vergro also wants to expand with DVL in St-Katelijne-Waver to a size of 8,000m2. The preparations have been done. Now, they need only to wait for the necessary permits.

At the end of the official part of the celebrations, there was only one question remaining - who won the 'Vergro Classic'? Sports reporters, Martial and Noël, gave extensive live commentary. Red-faced, the Red Modoc crossed the finish line first. This pear has a high yield in weight and always has a red flush to its cheeks. Vergro has the exclusive European license for this pear variety.

With the announcement of the winner, the well-organized party got started and continued well into the wee hours of the morning. One thing is clear - Vergro is ready for the next 50 years.