These days many growers are looking for solutions to reduce labour in the fields and packhouses, robotics is one of the ways to do this, but replacing pickers of delicate fruit such as strawberries with a robotic picker is very challenging, the technology is not yet available and would not be affordable for many growers.

React Robotics has come up with a solution to reduce the workforce by as much as 20%. Specialised in robotics, artificial intelligence and enterprise software development, the team came up with the idea of building a robotic dog. “We are interested in bringing human capabilities to robots, typically robots are big and clunky, slow and and even when they are on wheels, they are limited by the terrain,” explains Gregory Epps, CEO of React Robotics. “We wanted something that could do what people can do and one of those things is walking. Wheels are very efficient but when the ground gets rough or when it comes to stairs, curbs or steps then the wheels are useless, similarly with obstacles like a slope or a ditch or a log in way, whereas legs can just step over this.” 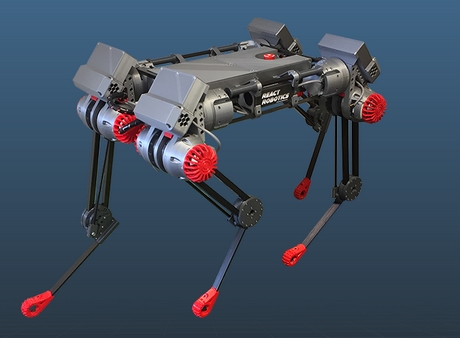 Robots with legs largely don’t exist in the market just now, any which are greatly ambidextrous are hugely expensive with prices ranging from £250,000 to £500,000 and they are still very slow, according to Gregory. “If you were to say to a farmer why don’t you buy this half a million pound robot which is ten times slower than your manual labour they are not going to go for it, so we set out to build something that would really change that, our aim was to make this 10 times cheaper, lighter and faster.”

The company now has a prototype and are talking to people to see how they can solve specific problems. Given the current labour shortage, Gregory reckons they can deliver this product at a cost-effective price, in terms of the performance.

At the moment the UK has around a 20% deficit in available seasonal labour, which matches the 20% of the picking task which is carrying the trays, so React Robotics wants to give people the capability to get back up their full quota.

“We have created a robot on legs, DogBot, which will take the full trays of fruit to a packhouse or waiting trailer. The pickers would place the full tray on a passing robot which would learn the location of the packhouse or trailer. If your robot needs to step over rows it needs legs, so it is ideally suited for the fruit picking terrain.” 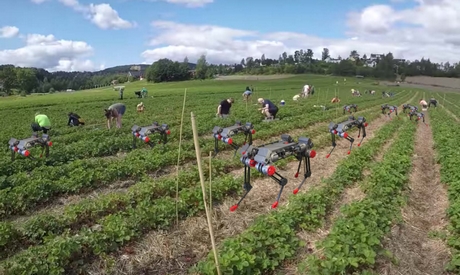 They are talking to farmers to see if they can offer a solution: does it work for outdoor growing? under polytunnels? and which fruits could it work for, strawberries, raspberries, cherries potentially some vegetables?

“We have calculated that we can deliver this at the right price,” said Gregory. “But the detail is in what is needed out in the field. We will now go out and do trials in the fields in 2019 to fully understand how far we are and how much more needs to be done with a target of delivering a product in season 2020.”

“We are looking at offering a rental option on the robot, the season is around 3.5 months and it would be difficult for someone to buy the robot out right and just use it for three months a year. If we discover that it can carryout other tasks around the farm, then I suspect people would rather buy it. If you have 200 workers you would probably need around 40 of these for the season, but you wouldn’t need forty for the whole year.”

Dog Bot will have a 20kg payload capacity which is enough for soft fruit picking but not for apples and pears. The robot is the size of an average dog and it can carry other things such as sensors and tools so could out and do soil sampling etc. Gregory is certain there are more possibilities to be discovered in fresh produce, as well as uses in other sectors.