The Japanese fresh fruit market is estimated at around 4.71 million MT demanded as of 2015. Currently, Japan imports one third of fresh fruit demanded, approximately 1.6 million MT in 2017, led by banana, pineapple, kiwi, orange, and grapefruit.

The United States ranks second (after the Philippines) in value of fresh fruit exports to Japan at US$360 million in 2017. The United States is the leading supplier of orange, lemon, grape and cherry. The Japanese fresh fruit sector is highly competitive with other countries making some inroads to the market. Opportunities for U.S. fresh fruit exports to Japan are expected to increase in the near- to medium-term due to a decrease in Japan’s domestic production resulting from ageing fruit farmers.

Japan is located in the temperate zone and it produces a wide variety of fruits suitable to the climate of each region nationwide. Japan produced 3.63 million MT of fresh fruit in 2015, based on the latest data compiled by the Japanese Ministry of Agriculture, Forestry and Fisheries (MAFF). Fruit production was led by apple with 22.4%, followed by mandarin with 21.5%, watermelon with 9.4%, and Japanese pear with 6.8%.

The fruit production in Japan has been in decline since its peak in the 1970s. This decline was a result of Japan’s industrial structure transformation that occurred in the latter half of the 20th century, during which the primary industry, as a whole, lost its share of the Japanese economy to the secondary and the tertiary service industries. 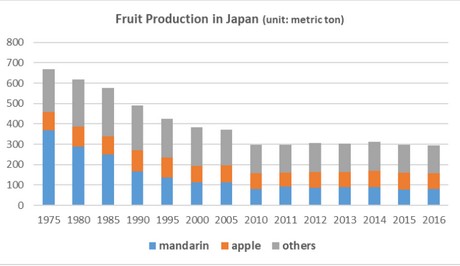 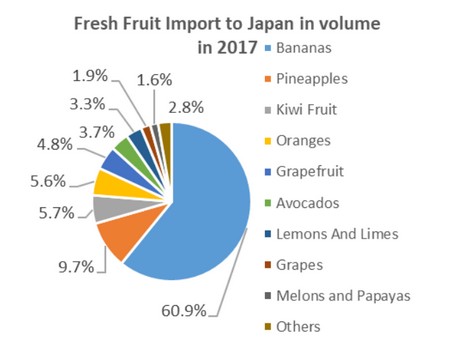 Banana
Banana has been the dominant item among the imported fruits. The leading supplier to Japan is the Philippines with a dominant share of over 80% of the value followed by Ecuador with 15% in 2017. Banana has been a popular fruit among Japanese consumers. It is easy-to-peel, sweet, and relatively low-priced, therefore it stays as the top favored imported fruit in Japan.

Pineapple
Pineapple remains popular and is enjoyed by many Japanese consumers. The Philippines is the dominant supplier to Japan with over 90% share in volume terms, followed by Costa Rica with less than 5%. Domestic production is very limited as it is only occurs in Okinawa, a southern island of Japan.

Kiwi
Kiwi has been rapidly increasing its popularity. Imports used to be valued at less than US$100 million in 1990s and then started to grow rapidly, tripling to over US$300 million in 2017. Zespri from New Zealand conducted a massive promotional campaign that included TV advertisement as well as sampling/tasting at retail stores to succeed in making kiwi a popular fruit among Japanese consumers.

Orange
Orange imports have been in decline since peaking at over 190,000 MT in mid-1990s. This is mainly due to the advent of a wide range of new citrus varieties to the market that have successfully competed for the tastes of the Japanese consumer. The US is the leading supplier of orange to Japan with over 50% import share in volume and value terms in 2017 but is ceding market share to Australia and South Africa. U.S. oranges do not compete directly against those from the Southern Hemisphere. Still, the timing to switch from U.S. products to those from the South Hemisphere in the Japanese market has been moved up in favor for the latter.

Grapefruit
Grapefruit was the second major imported fresh fruit into the Japanese market during early 2000s reaching over 280,000 MT. Nonetheless, grapefruit imports started to decline in 2005 and recorded only 78,069 MT in 2017.

The consumption of grapefruit has declined in Japan due to sweet fruit preference among younger consumers coupled with the reported incompatibility of grapefruit with hypertension medicine, which has led the majority of older Japanese consumers to refrain from consuming grapefruits. The US used to be the largest supplier of grapefruit to Japan over the years but it yielded its number one positon in volume to South African for the first time in 2017, due to a short supply caused by the damage from Hurricane Irma and greening disease.

Lemon
Lemon has a steady demand in the Japanese market. Domestic production is limited, recording only 11,500 MT in MT2016/2017. The United States is the leading supplier to Japan with about 60% of the import market share, followed by Chile.

Table Grape
Imported table grapes have been getting popular among Japanese consumers. Crispy and sweet varieties edible with skin have been well accepted as a new type of grapes, different from Japanese original grapes.

The United States is the leading supplier to Japan with 35.3% import share followed by Chile and Australia with 33.4% and 27.2% in volume terms. As the U.S. enjoys the higher unit price, it has 40.4% import share in value terms while Australia and Chile presented only 29.7% and 25.1% respectively. Still, Australia and Chile, who enjoy advantage of the seasonal difference, have been expanding their share in the Japanese market.

Cherry
The United States possesses the dominant share of over 98% of imported cherry market, followed far behind by Chile and Australia with less than 1%. Still, the import volume used to be over 10,000 MT early 2010s but it dropped to the level of 5,000 MT lately.