Mobile solutions and data sharing the trends in shipment monitoring

Emerson, a cold chain management company, has recently launched several new Real Time Trackers to add to its lineup. These include the GO Real-Time Carbon Dioxide Tracker, the GO Real-Time Secure Tracker, and an enhanced GO NFC Logger, which has added mobile device capability. All of these were launched at PMA Fresh Summit in Orlando last month.

Matthew Neidlinger, Director of Product Management at Emerson Cargo Solutions, said the company's intention is to establish themselves as the 'one-stop shop' when it comes to the monitoring of produce shipments. "We provide a complete hardware and cloud services offering for cold-chain monitoring," he said. "Transit is only a small part as we have the capability to monitor the cold-chain from the farm, through transit, in warehouses and in retail stores. The core of what we provide is information and visibility into our client's shipments of perishable products."

He noted that the devices cover two components - data logging, and real-time trackers. The information collected is sent to Emerson's software Oversight, where shippers can log in and access the information they need, whether it is temperature, light, location, and now CO2. It gives them the ability to take action on that data in order to help maximize the freshness of the produce in transit.

CO2 tracker for modified atmosphere shipments
Shipping produce in containers is getting more sophisticated, with a greater number of variables in place than ever before. While temperature remains the single most critical measurement of produce, the level of CO2 is one aspect where shippers have been asking for greater control. Therefore, Emerson launched the GO Real-Time CO2 tracker to monitor CO2 levels in transit.

"Some of our customers have commodities in controlled atmosphere, where gases like Oxygen, CO2 and ethylene are present," Neidlinger observed. "Measuring the level of CO2 is useful because it has been shown that if you can dial in on and maintain the optimal amount, you can effectively halt much of the ripening process until it arrives at the destination, extending the shelf life and maximizing freshness. The CO2 tracker can also measure other critical points like temperature. It sends alerts on mobile phone and other formats like email so the client can check it anytime."

Better security needed
Another factor that is getting more attention is security, and it seems more shippers want the ability to track their cargo's location. Emerson said its GO Real-Time Secure Tracker was designed to combine GPS tracking with a CTPAT (Customs Trade Partnership Against Terrorism) compliant steel locking bolt. An alert can be issued if the load deviates from its course, or if the doors are opened, for example. Neidlinger said that the demand for this level of monitoring is growing due to the increased incidents of produce theft. It can also be combined with a GO Real-Time Tracker on the interior of the container.

"We have witnessed an increase in cargo theft, with thieves becoming more sophisticated in how they steal cargoes that can be worth tens of thousands of dollars," he explained. "The GO Real-Time Secure Tracker enhances supply chain security, reduces the financial loss from stolen cargo, and can assist law enforcement in the recovery of high-value items." 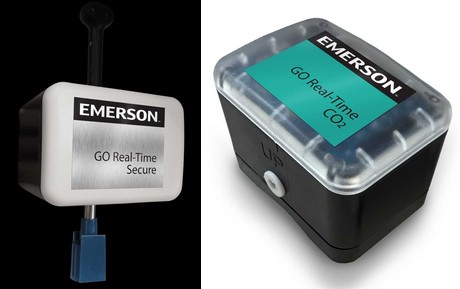 The new products from Emerson

Oversight software
All the data that the devices collect is gathered and sent to Emerson's Oversight cloud-based software, where the client can view the data as well as customize alerts and parameters. Emerson designed it so that it can have different permissions for different users in the same company. Neidlinger gave the example of where a manager might be able to change when alerts are triggered as well as view the data, while another person might only need to see certain measurements pertaining to their task. This serves to protect the integrity of the data as well. "We can restrict certain functions and allocate rights depending on what the customer needs," he said.

One of the most important features is the ability to view data on both a desktop computer as well as a mobile device. This is something that Emerson sees as a growing sector. "Oversight can be used for both desktop and mobile," Neidlinger said. "The mobile app has all the functions and data that the desktop version has for the majority of tasks. The ability to be mobile is a very important area to our customers and we want to provide that option for them. Whenever we launch new products, we always have it in mind to make it available across all devices."

Data sharing the trend for the future
The new devices received positive feedback at PMA, Neidlinger noted, adding that the Emerson booth was well visited. The company recently announced their participation in the IBM Food Trust. This is a place where companies can securely share data using Blockchain for the benefit of the wider industry. According to Neidlinger, data sharing at this level is a growing trend amongst produce companies.

"Emerson is an early participant in the IBM Food Trust," he stated. "We want to contribute cold chain data in order to help improve the shelf life of produce and make shipping produce better in general. Data sharing is a growing trend that many companies are willing to be involved in."

And when it comes to data, Emerson said they offer a managed service if a customer prefers to look after other things instead of having to monitor data all the time. "Some customers are hands on, they like to have their data straight on to their system and be in charge of it," Neidlinger concluded. "Then there are other customers who want Emerson to look after the data and manage the alerts for them. Therefore, we also offer managed services for customers to do the monitoring on their behalf."