Costa Rica is by far the largest exporting country of fresh pineapples with more than 2,000 containers per week. “Half is meant for the European market and the other half is meant for the American market. Due to production increases in pineapple-producing countries in Latin America, volumes will only rise,” says Mario de Goede of import company Nico de Jong. “The production increase was caused by a need to meet growing demand from industry. Besides, the countries expected China would be a major new market for pineapple. Both markets were flops. In 2017, industry prices dropped from 30-35 cents to 6-8 cents. China was unsatisfied with the product and stopped importing. The product wasn’t what they expected, this was partly caused by the long transportation times.” 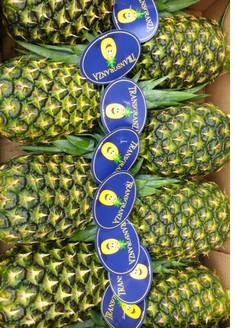 Revenue model
“Because the largest pineapple brands, such as Dole and Del Monte, are established in the US, the overproduction is shipped to Europe. As a result of the large volumes, prices have been below par for years,” Mario says. “To create a certain revenue model, a box should sell for at least 8 euro. We only managed this from January to March. In 2017, the market level was also too low to create a revenue model for all parties involved. For the coming years, the challenge is to regulate the market and make it healthier. I think there are two solutions: either production has to decrease, or a new market should be added, such as Asia or South America itself.” 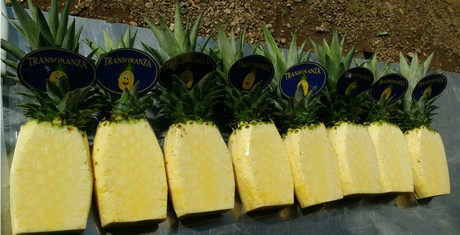 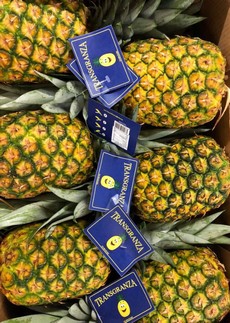 Overproduction
The South American governments don’t regulate the market to keep it healthy. Overproduction isn’t curbed. As a result, the market should start to correct itself, and this will definitely start happening according to the importer. In Costa Rica, a lot of small farmers will disappear because they won’t be able to scrape a living. Production will shift towards large companies and multinationals. “I think 2020 will be a better year for pineapples. It’s difficult to predict the market, but looking at the history we can see a tendency of good and bad periods taking turns. If we’re in a bad period now, 2019 will be a transitional year, and 2020 will be better,” Mario says.

The strikes in Costa Rica last September had an effect on the pineapple market. The strikes led to the volumes arriving in week 40/41 being very small. Containers were left in the ports of Costa Rica, and these were shipped a week later than scheduled. “Fortunately, the strikes didn’t affect us much. We had to switch quickly, and we decided not to load everything, that’s why the damages were very limited for us,” Mario continues.

Summer fruit
The consumption of pineapple drops in the summer period, and June is normally the worst month due to the availability of summer fruit on the market. “Summer fruit tends to be local and ready-to-eat, and pineapple can’t compete with this. We see demand rising again in August, and August to October and December to March are the best months for pineapple,” the importer says. “Just like mango, pineapple has become a volume product. Competition is considerable, and prices are under pressure as well.”

Convenience
“We’ve noticed that crownless pineapple is a product particularly well-suited to industry, but it’s also used for fruit salads and juice. More and more people are buying fresh-cut and fruit salads. This was never this successful in the past. Vegetables in bags have been popular for a longer period than pre-cut fruit salads. Yet we’re seeing this segment becoming larger and larger for pineapple. More and more supermarkets have pineapple peeling machines that cut the pineapple into a cylinder and puts it in a plastic cup. Convenience is also becoming more important in the fruit sector,” Mario concludes.