In the spring many courgette growers had doubts about how the main variety of green courgettes would weather the season. Some growers even switched entirely to yellow. The main variety of green was said to be of lesser quality, making cultivation 'at your own risk'. "Green went well in cultivation in the end," says courgette grower Bert Doelman towards the end of the season. "The variety kept reasonably well, there were a few bad plants in the mix, but nothing unmanageable." 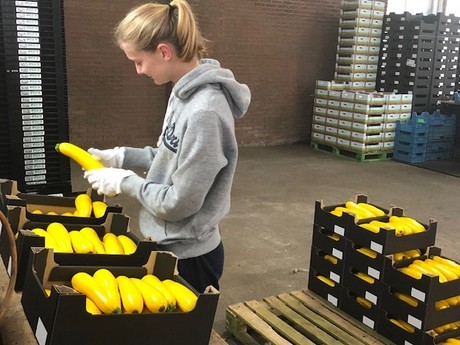 In the warehouse at Firma Doelman. More yellow than green courgettes were planted in the autumn.

Bert grows both green and yellow courgettes. For now the question is how long the cultivation will continue. "I expect two weeks at most, after that it will be all done. But it needs to be less cold and wet than is it now, that will end it even faster. Courgettes like subtropical conditions with enough heat and light and that's not the case at the moment."

Summer heat follows crop for the rest of the cultivation

The hot summer also had its effects on the cultivation. "The crop has been bothered by the extreme summer heat for the rest of the cultivation. Especially the July 20 planting. You can still clearly see the effects of the heat in the crops. The planting of August 3 on the other hand kept well."

Besides doubts about the green main variety, the sector was waiting to see what the prices would do at the start of March. The season started with 'summer prices' due to the cold temperatures at the end of March. "Price formation remained mediocre for green courgettes for the rest of the season," says Bert. "It has been slightly better in recent weeks, but we're cutting less now too. In the early summer you can easily harvest four per metres, so you want to have good prices. Unfortunately that wasn't the case."

Cultivation on contracts increasingly seems to be a 'must' for green

For a large part of the spring Bert was able to grow his courgettes on contract. "For green in particular you have to grow on contract with the current market situation. The free market for green courgettes is very hard. Spain is always extending their season and natural cultivation also causes a lot of supply during the season. The time frame in which greenhouse courgettes are in high demand is short. That makes it a difficult market."

Stopping and starting for yellow, but better prices

The prices for yellow on the other hand were better for the whole season. This was what growers were hoping for, as the production of yellow is often slightly lower. Higher prices are meant to compensate that loss of production and this seems to have happened despite the supply of yellow courgettes increasing due to those switching over. "We didn't have sky high prices for yellow, but the free market for yellow was better. It's more of a growth market, a market of supply and demand. It is, unlike the market for green with more supply and therefore a stable price, more a market of stopping and starting: if there is slightly too much supply, no one will get anything, whilst if there are shortages, the prices will easily shoot up."

At the end of October the prices were rising towards the Euro. In anticipation of this Bert plants slightly more yellow in the spring, 0.4 hectares extra compared to the rest of the season. "Today (October 30) I had 90 cents for yellow for the first time, but in previous seasons the prices were up to a Euro in the first weeks of October. You can see that there is scarcity now due to the turn in the weather. I hope to profit from this as long as the crop can maintain it." After that the greenhouse will have to be made ready for the winter. "I hope to plant again in the last week of January. That's the plan for now."