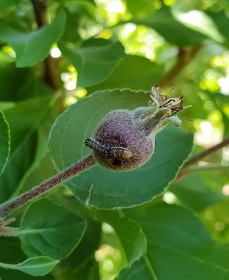 The recent heat wave in the Western Cape that started around 22 October has given way to more temperate temperatures. The full effect of the high temperatures – some areas edging past 40°C – on fruit crops will become clear over the next few weeks, but overall the prospect for the season looks far more favourable than last year.

Bollworm (pictured right on a young Royal Gala fruit), which eats its way into young fruit, thrived under the hot conditions and populations exploded as the life cycle was shortened, placing pressure on the effectiveness of pest management programmes.

The third negative factor to have touched some Western Cape production areas was the strong winds this past Monday – up to 86km/h in some places, blowing off young fruit and causing rub marks.

Peaches and nectarines
The nectarine and peach harvest had already started a few weeks ago. “The heat wave wasn’t a disaster, but we had to increase the picking tempo to get the fruit off the tree before quality is affected,” says Malcolm Mackenzie, technical manager at Graaff Fruit, one of South Africa’s major peach and nectarine producers. “During a heat wave you know you have to reach a bit deeper into the tree and when you start picking what we call the ‘bright lights’, the fruit from the earliest flowers, it triggers the ripening of the rest. We found that the heat accelerated fruit ripening.”

Sugar development was boosted by the heat and exports can continue briskly.

Plums
In some areas farmers were advised to put the thinning out process on hold during the heat wave but overall the effect on young fruit looks to be minimal. On late-flowering cultivars like Ruby Star and Songold the heat wave appears to have reduced fruit set, but only on some farms, not across the entire production area.

“In general, I’m comfortable with the plum harvest. There are many new plantings that will improve volumes. We’re expecting an average-sized harvest and it looks much, much better than last year in terms of water,” says Charl Stander of Freshness First in Franschhoek. “The weather pattern is strange and we seem to have skipped springtime. In one week we went from over 40°C to the high 10s which isn’t ideal.” 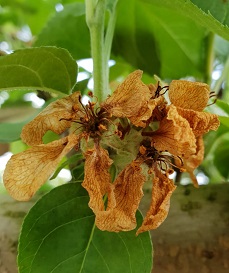 Topfruit
Late-flowering apples suffered damage during the heat wave as blossoms dried out and there are orchards where the harvest will be significantly reduced, says Graeme Krige of Fruitmax Agri, who provided the photo (right) of withered Cripps Pink blossoms on which there was no fruit set.

In orchards already past the flowering stage there was a higher incidence of fruit drop but it remains to be seen, Graeme says, whether this will lighten the harvest or just lighten the task of fruit thinning.

The occurrence of November fruit drop on Packham pears is a bit higher than normal.