Restrictions may only be revisited by mid-2019, or lifted when Kouga Dam reaches 65%

In the Langkloof most topfruit orchards have finished flowering and growers are in the process of fruit thinning. Their dams are full and yet the new season has brought an unwelcome irony: a year ago, Langkloof dams were 30% full and the nearby Kouga Dam 12.6% full (later dropping to a mere 6%), but there were no water restrictions on Langkloof fruit producers.

This year, after good rains a month ago, Langkloof dams stand at 100% and the Kouga Dam lifted to 54.6%, and yet Langkloof farmers now have only 20% of their usual water quota, and this at the start of the new apple and pear season. A fifth of South Africa’s apples are grown here. 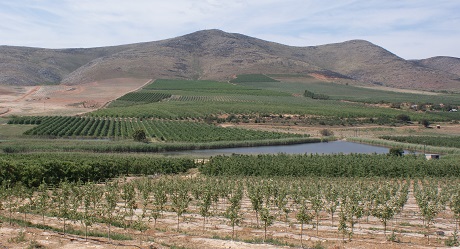 Topfruit orchards in the Langkloof, which straddles the Western and Eastern Cape

Citrus and vegetable farmers in the Gamtoos area (Hankey and Patensie) have already been labouring under an 80% water restriction since mid-2018 (for most of the 2017/18 citrus growing season the area still had 40% of its quota) and vegetable production has been curtailed severely. Citrus orchards are entering the period of fruit drop, while recent temperatures in the Gamtoos have sporadically been over 40°C.

According to a proclamation published in the Government Gazette by the Department of Water Affairs and Sanitation, water restrictions will be totally lifted when the Kouga Dam is 65% full. Otherwise, the water restrictions may be reconsidered on 1 June 2019 because the departmental water model only allows adaptions once during each water year.

The position of agricultural producers is that they’re not angling for a lifting of water restrictions, they’d be satisfied with 50% or even 40% of their usual quota, but thus far there’s been no relief.

This rigidity is infuriating and exasperating Langkloof and Gamtoos farmers in equal measure. The drought of the past three years has already led to significant job losses, primarily among already vulnerable seasonal workers.

No public participation process
“What’s important to note, is that the Langkloof has never before 2018 had any water restrictions. At the start of the year our water quota was cut by 60%, leaving us 40% of our quota for use. When we heard about the department’s intention to cut it to 80% - because there was no public participation process – I went to the meeting of the Algoa Water Supply System and I asked them: don’t publish the proclamation just yet, rather postpone the decision, because Langkloof farmers hadn’t yet started irrigating and there was a chance of rain – in fact, in the past some of our biggest floods have been in October and November,” explains Marius van der Westhuizen, topfruit farmer in the Langkloof and Hortgro representative.

Government disregards alarming economic impact study
In June they requested a grace period to allow the Bureau for Food and Agricultural Policy (BFAP) to conduct a study on the impact of water restrictions on Langkloof production and the local economy. The BFAP study came to the alarming conclusion that a 70% water restriction would result in a 50% reduction of the top-fruit harvest, thereby halving employment in an already impoverished area (estimated job losses in the order of 6,600) and a loss in export earnings of more than R500 million (over 30 million euros).

The irony is that the Langkloof now faces a harsher water restriction than the worst case scenario around which the BFAP study was predicated.

Officials from the Department of Water and Sanitation listened to the grim predictions of the study, and then went ahead with publishing the 80% water restriction in the Government Gazette.

“And my words came true: a week after that we had the rains that filled up our farms dams over a weekend – we had between 150mm and 300mm across the Langkloof.”

In the Langkloof and in the Gamtoos it is felt that the signs of water shortage have been present for years and that instead of incremental water restrictions, government waited too long and then instituted a disproportionately harsh measure. There are reports of poor infrastructure maintenance and massive water wastage in the Nelson Mandela Municipality (Port Elizabeth), also partly dependent on the Kouga Dam. Water storage capacity has remained in arrears, with the third stage of the Nooitgedacht Scheme postponed and the lifting of the Kouga Dam wall still not started. 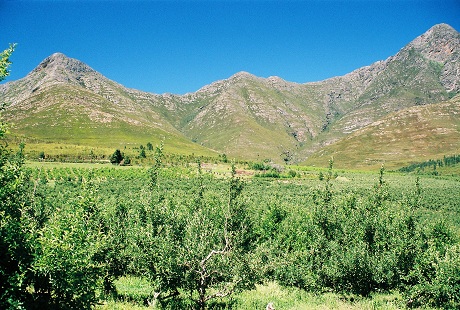 A valley in the picturesque Langkloof

“We’re on thin ice”
“If you plant an apple orchard, it takes between 10 and 12 years to break even. We have long-term crops in the Langkloof, we can’t decide not to do anything this season – we have to at least keep our trees alive,” Marius says. “Over the past decade our margins have shrunk as input costs have risen above inflation, at times even at double the inflation rate. In the Langkloof and in the Gamtoos there’s only agriculture. I don’t think the fruit industry in the Langkloof will go under but we’re on thin ice.”

The Chief Director for the Eastern Cape at the Department of Water and Sanitation, Portia Makhanya, is reportedly sympathetic to the argument put forward by the agricultural sector and has asked until the end of this month to come up with a solution. Producers in the Langkloof and Gamtoos are preparing to escalate the matter if nothing is forthcoming from the Department of Water and Sanitation, even possibly taking the matter to the courts for relief.