Halloween is just around the corner and for North Americans, this is the height of the pumpkin season. In Canada, growers in British Columbia have finished their harvest, which began in the latter part of September, while some other regions such as Manitoba still have some left. It was a hot summer in BC and as a result, the season started earlier than usual.

"Due to the hot weather in the summer months, the harvest began earlier," observed Andrea Dubak of Thomas Fresh. "Usually pumpkins are not available until the end of September, but this year our grower harvested their first batch on September 22nd. It’s never too early for pumpkin pie!"

Another factor on the minds of BC growers was the fires which devastated huge areas of the province. Dubak, however, said pumpkin growers were not affected. "Although the fires were vast in BC, they did not impact the growth of crops within the lower mainland of the province, which is where many pumpkin farms can be found," she said. "A potential reason for this is that much of the smoke was blown east towards the prairies. In addition to geography, pumpkins can be less susceptible to summertime forest fires as they are not harvested until mid-September. By this time the smoke in the atmosphere has had a chance to clear away." 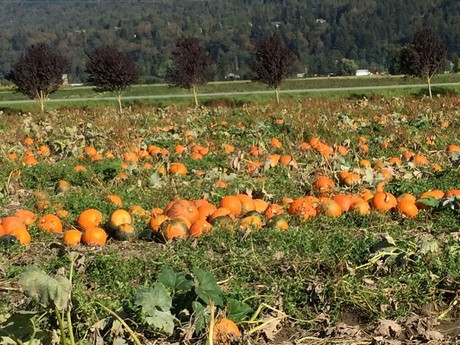 Canadian Thanksgiving heralds spike in pumpkin demand
As a seasonal item, the demand for pumpkins is strong yet consistent at this time of year. Canadian suppliers note that the Canadian Thanksgiving - which falls in early October - marks the start of the peak of pumpkin demand. The second 'spike' occurs in the lead-up to Halloween, after which demand typically drops right off.

"Pumpkins get their first spike in demand with the coming of Canadian Thanksgiving and another increase during the weeks leading up to Halloween," Dubak noted. "Shoppers look to pumpkins as a Halloween staple for making Jack-o-Lanterns and other spooky decorations. "After Halloween the demand for pumpkins drops and stores aim to run out of stock the evening of October 31st. After this time, pumpkins are usually donated to local charities wherever needed."

Some pumpkins good for decoration, others for baking
When customers walk into a supermarket at this time of year, they are greeted by a huge assortment of pumpkins of many different shapes and sizes. Many people enjoy carving them, while others feel they are better used in the kitchen. Different varieties are better suited for different activities. One of the varieties available is the 'Sugar Pie Pumpkin'. These are generally smaller and have a smoother skin compared to the larger pumpkins. According to Dubak, they are ideal for baking, although decoration is also entirely possible. 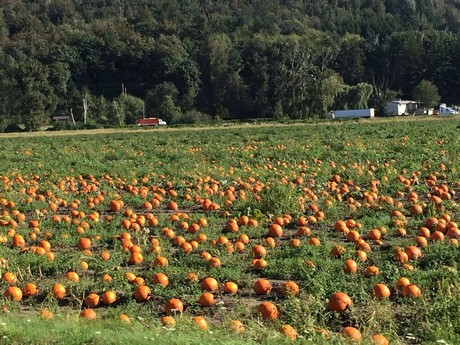 "Sugar pie pumpkins are mainly used for what they are named after – baking pies, and they can also be used in soups and purees," she explained. "These smaller pumpkins have a firmer, sweeter flesh which provide a good 'pumpkin' flavour. For decoration, sugar pie pumpkins can be made into Jack-o-Lanterns, however they can be tougher to carve as they provide a small surface area. In recent years, we’ve seen a new trend gaining momentum, pumpkin painting. The smooth surface and smaller size of sugar pie pumpkins make them perfect for this."

"Regular pumpkins are targeted towards carving and decoration purposes with their larger sizing and varying shapes," she added. "However regular pumpkins are edible too, even though they contain less flesh and tend to have a more subtle flavour. The seeds can be roasted, and there are many recipes online that put 'pumpkin guts' to good use. Some of these interesting recipes include: pumpkin sherbet, pumpkin cheesecake and even pumpkin butter."

Focus on digital marketing
While Thomas Fresh does not directly provide POS for pumpkins on the retail level currently, they participate in promotions largely through digital formats. The pumpkins are available in bulk bins and the company said they concentrate on sourcing locally-grown pumpkins.

"Sugar pie pumpkins are sold in 150 ct bins while regular pumpkins are offered in 600 lb bins," Dubak said. "We work closely with local Canadian growers to provide the marketplace with fresh pumpkins each year. We do market pumpkins and sugar pie pumpkins in our digital newsletters and social media to create awareness for our customers."