Here is Morgana, the juiciest apple of all time

On the 24th of October, a new apple was showcased to the international press, at the Fruit Attraction: Morgana. This fruit is the result of a partnership between the four companies making up the Morgana Apple Group-MAG. The companies are the Dutch Mergelland Fruitland, the Belgian BFV, the German Krings and the Italian Melinda. Morgana is the brand name chosen for the marketing of the Kizuri cultivar. This new variety was born in Belgium thanks to the nursery farmer Better3Fruit.

The company that holds the patent is ABCz. The four partners signed an agreement, thus obtaining the exclusive marketing in Europe. Melinda has the exclusive rights for the Italian market. In Germany, this variety is already available. 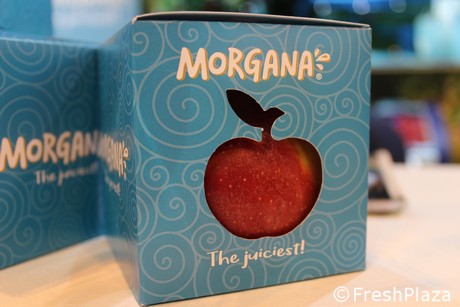 Morgana is one of the new varieties of the Consorzio Melinda. These are developed by taking into consideration two different strategies: on one hand, through the strengthening of the qualities regarding the organic farming and the defence against the fruit diseases; and on the other hand, through the selection of innovative products, which respond directly to consumer needs. Our consumers are very demanding and they look for uniqueness through the selection of tailor-made produce.

Andrea Fedrizzi, the marketing manager of Consorzio Melinda, told FreshPlaza, “As for the Melinda, we will market Morgana through co-branding. However, we still have two years of time to fully understand the logic of distribution. This year will be devoted to the planting. We should wait until 2021 in order to have enough production to start the marketing. Full production will be in 2022-2024. We are considering every distribution channel - even though we will see later which one will perform better with regard to this apple. Obviously, both the Gdo and the traditional distribution will be there, for they are the channels most used by the Consorzio. 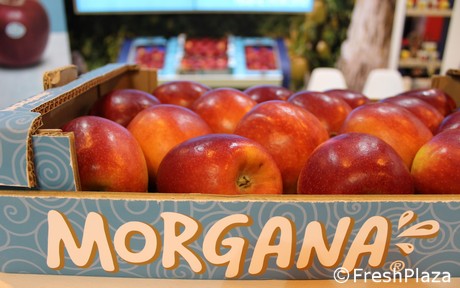 Morgana is an inviting fruit, with a particularly juicy pulp. It has a bright red skin with light yellow shades. It can satisfy even the most demanding tastes, thanks to its crunchiness and mixed yet balanced aroma – characterised by a tropical and spicy flavour, similar to anise. Additionally, Morgana is an extremely healthy fruit, rich in vitamin C, refreshing and thirst-quenching. It has a good size and a sugar level of 14-15 Brix degrees.

Morgana is a classy, sophisticated and high-quality apple. It is especially suited for those 20-50 years old consumers who prefer high-quality produce. It is the ideal for consumers ‘on the move’”.

The chosen brand name was dictated by aesthetic parameters: the name implies deep and sensorial images which are connected to the organoleptic characteristics of the apple itself. For instance, the concept of ‘Morgana Witch’ describes the optical illusion of seeing an oasis in the desert. Therefore, it recalls the concept of juiciness and freshness proper of this apple, which is defined the ‘juiciest of all time’. Also, the name Morgana refers to the famous witch from the Arthurian legends. With this name, the apple is surrounded by a mystical and magical aura, thus improving its perceived value. 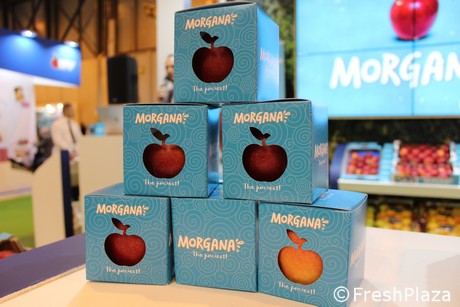 By the end of 2019, 600.000 trees will be planted in Europe, in order for this apple to have a significant role within the market, starting from 2021. Michele Odorizzi, president of Melinda, stated, “Morgana is a product of extremely high-quality. The lands of Valle del Noce further promotes the apple’s peculiar characteristics”.

With regard to consumers and the trading, this apple opens up many opportunities. It has an excellent shelf-life. Plus, the communicative language is particularly impactful. Morgana has a highly distinctive packaging which is structured through a mixture of colours and innovative elements that remind of water drops, thus giving the idea of freshness.

Additionally, a few golden shades highlight its status as a premium product, its splendour and its luxury. The logo claims ‘the juiciest’, which is self-explanatory. 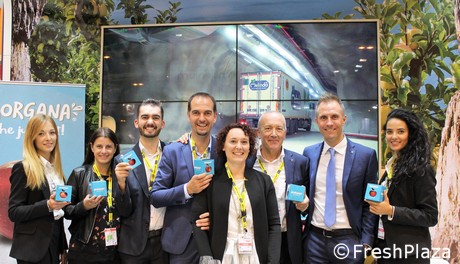 The Melinda Team at Fruit Attraction 2018

Currently, Melinda is active in Spain, Scandinavia and UK. The company will market Morgana in those countries together with its other products. Fedrizzi explained, “Morgana could be the ideal product to export to the Middle-East and to the new Eastern markets. The apple has a good long-term durability, thus making it very suited for long-term transportation. The Spanish market is important enough now, but it will be even more important in the future. Fortunately, our Spanish 'audience' has similar preferences to the Italian one.