The first Spanish mandarins are on the market, coming in next to the varieties that are rounding off the overseas season. On the cusp of these two seasons, we take an overview of the global market.

In Southern Europe, people are feeling mostly positive even though the early Spanish varieties seem to be small in size. However, Spanish citrus is slowly taking over the market. South America is making room for European and domestic product. Latin American countries are working on their export positions. Borders are being opened, and trade agreements are being signed. The country is also trying to use regulations to keep the quality of their fruit high.

Italy expects good early clementine harvest
The estimates for the Gulf of Taranto are good. There is talk of an excellent commercial year in terms of both quality and volume. This good news is thanks to the favorable climatic conditions with sufficient rain. For clementines, a 20% yield is expected. The most important market for this fruit is retail and exports. Italian clementines find their way to countries such as the Czech Republic, Ukraine, Romania, and the Baltic states.

The Italian town of Massafra is near Taranto in the province of Puglia. Here, the early clementine season began with Orogros and Clemenrubis. These are seedless varieties with a deep, orange color and a high Brix level. Many large sizes are expected which is favorable for the domestic market. The production variety, Lorentina, is blooming at the moment.

In Lentini, Siracusa, Sicily, the Rudolfino is available. This fruit is a hybrid clementine, a mix between a blood orange and a local mandarin variety. This variety is well-loved for its nice peel and good taste. It is also an easy peeler. 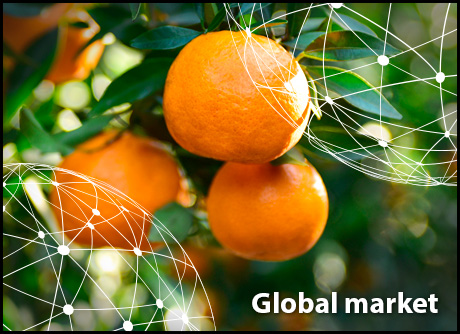 Spain: more small and medium sizes of early mandarins
In Valencia, there was a short heat wave at the beginning of August. Except for this, the past summer was not very hot. This weather was beneficial for the early mandarin varieties such as the Iwasaki, Okitsu, and Owari. This year, the growers in this area of Spain hope to make up for the losses of the previous year. "We expect significantly higher volumes than last year,” says one of the traders.

At the end of September, a trader said the quality is good, even though there seems to be a large number of small and medium sizes being harvested. "We anticipate more pressure on the prices this year", he said. The first mandarins have since been picked. These early varieties can be found on wholesale markets in Europe.

Meanwhile, the harvesting of Clemen Rubis, Marisols, and Oronuls has also begun. This year's yield is more abundant than last year's. In Valencia, the largest cultivation area, a 21,5% increase is being anticipated in comparison to the previous year. Click here for the initial harvest estimate.

There is, however, an abundance of small sizes which are not suitable for export. Exporters are, therefore, estimating a loss of 10% in volume. The start of the season is increasingly complicated for Spanish mandarins every year. There is also an overlap of seasons with the Nadercott, Clemcott, Tango, and Orri from the Southern Hemisphere. That is why the sector is looking at ways to extend the season. Since there are fewer sizes available, prices are expected to be higher. There are, however, some exporters who expect that prices will soon be put under pressure.

The season starts in Turkey
Here, the season has just begun. It is expected to run through until March. In general, the Turkish citrus season ends in May, with the exception of the mandarin. This fruit is exported all over the world. The most important markets are in Europe, Russia, North America, and the Far East.

French season has not yet begun
There are hardly any mandarins and clementines to be found on the French market. The season will only really get started at the end of this month. From 20 October, clementines from Corsica will arrive at the market. These have a PGI (Protected Geographical Indication) and are popular among French consumers. "The higher a product's quality, the more popular it is", says a trader in this country. Price is less important than quality. Spanish citrus also always does very well in France.

The Netherlands: More, and especially more small mandarins
The consumption of mandarins took a real hit this summer. This drop was due to the warm weather. Since the schools started again, the market recovered again. However, July and August were tough months for these products. The Spanish supply has since started up well. The hot nights, however, meant that the coloring of the mandarins did not go too well.

Dutch importers are not happy with the sour taste of the first Spanish mandarins. This year, more, and especially more small-sized, mandarins are expected. These are comparable to the level of two years ago. These small sizes are may not all be commercially viable. This means the volume does not have to be much higher. Spanish exporters see a future in, especially, varieties with royalties. These include the Orri and the Nadorcott. Others see the Satsuma making a comeback.

German market switching over
The German wholesale sector currently finds itself in a transition phase. The citrus fruit from Southern Europe is slowly, but surely, gaining the upper hand. This is at the expense of supply from the Southern Hemisphere. Among others, more and more Spanish varieties are coming into this country's market.

Early organic clementines and Satsumas from Italy were also being welcomed onto the German wholesale market this week. However, South African products are still everywhere, especially the Nadorcott variety. The prices of European products, in particular, are fluctuating wildly at the moment. This was confirmed by the traders.

The US: European and domestic product taking over the market
The Chilean import season is coming to an end. The trade sector is, therefore, getting ready to switch over to European fruit. One trader is still expecting to get Murcotts from Chile over the coming two weeks. The season will definitely come to an end in mid-November.

The Chilean season was off to a late start. Limited volumes arrived in early July. That was a delay of three weeks. Despite the late start, the season will end at its usual time. "You want to have the Murcotts in before the Spanish and Moroccan supply comes in in November", says a trader. The prices have risen slightly from $26-28 per box to $28-29 per box.

In addition to the change over to imports from Europe, the domestic supply is also getting started. In October, the domestic season began with the first Satsumas. This was followed by other varieties, including the Murcott. New varieties are also being introduced. One trader says he will be including the Gold Nugget in their assortment from 2019 onward.

Chile closes season
The Chilean season has since drawn to a close. In the coming weeks, the last mandarins are to be shipped from this country. The harvesting began in week 27 with the early varieties from the Coquimbo region. The latest figures show that exports are 85% lower than the previous year.

This is mainly due to the late start of the season. Exports are expected to reach 101.000 tons. This indicates a growth of 32%. Since 2012, exports to the US have risen year-on-year. They have increased from 22.000 tons to more than 100.000 tons. A trader concludes that Chile has, therefore, secured a permanent place in the American market.

After the frost periods, the Chilean Citrus Committee - ASOEX - took measures to prevent mandarins that had frost damage from being exported. ASOEX is good for 75% of exports. With this, the organization wants to protect the position of Chilean citrus. Among other things, workshops were given on how to recognize frost damage on the fruit.

Peru gains a spot in the global market
Over the past 15 years, this sector has grown considerably. This allowed exports to increase. Several years ago, mainly varieties that had little demand were being cultivated. This has, however, changed. "This has made Peru an important producer in the Southern Hemisphere. In 2017, we became the first mandarin exporter in America,” says a trader. By choosing other, often patented, varieties, the country could gain market share in North America, Europe, and Asia. Citrus exports from Peru are growing by an annual average of 10 to 12%.

In week 30, Procitrus announced that exports of late mandarin varieties, such as the W. Murcott and Tango, have increased by 4% compared to the year before. This association represents 86% of Peru's citrus farmers. With this, exports came to 36.463 tons up to week 30 of the year. This is compared to 35.069 tons in the same period in 2017.

Brazil opts for seedless varieties
The cultivation in the country is mainly focused on the seedless varieties. A trader says in the latest harvest, 99,4% of the fruit was seedless. In 2007, the sector invested in the environmentally-conscious cultivation of mandarins. Brazil's political and economic situation has made it more difficult for businesses to keep their heads above water. The domestic market does, however, offer opportunities, says a trader.

Uruguay focuses on exports to the US
In 2010, citrus farmers here decided to focus on the production of citrus that meet the requirements of the American market. In a nutshell: seedless, nicely-colored, easy peelers. Good results have been achieved with this. Exports to the US are currently on the rise. Between January and June, Uruguay exported a total of 30.000 tons of citrus, valued at $20 million. The US is good for 60% of the exports, and 20% goes to the EU. The remaining volume is split between Russia, Brazil, Canada, and the United Arab Emirates.

South Africa exports more
The season is over in this country. The largest volumes go to the UK, Asia, Southeast Asia, Africa, the Indian Ocean Islands, and the Middle East. In a difficult season, the small citrus performed better than other categories. That was certainly the case in Asia and the Far East.

The UK is, once again, the largest importer of South African soft citrus. It is good for 28% of exports. This percentage corresponds to 4,5 million 15kg boxes. Their second largest market is Europe (25%, 3,95 million boxes), followed by Russia (11%) and North America and Southeast Asia, both good for 10%.

The drought in the Western Cape is over, and the recent rainfall in the Eastern Cape was a relief for farmers. The drought has put pressure on the sizes of the fruit.

Japan opens borders to Peru
After more than ten years of negotiations, Japan has opened its borders to Peruvian mandarins. The process began in 2007 and was recently concluded. The Japanese Ministry of Agriculture and Irrigation published the standards that the fruit needs to satisfy. The citrus is exported under cold conditions during transport.

Pakistan: seedless Kinnow can push exports
To be able to compete in the global market, experts in this country have advised farmers to grow the seedless Kinnow variety. The idea is to push up exports with this seedless variety. According to the experts, there is also a demand for the disease-free Kinnow.