Canada's retailers are behind on Fairtrade commitments for banana sourcing

Next week, the World Banana Forum will hold its first ever meeting on North American soil.

The WBF is a group comprised of global members examining key sustainability issues impacting the banana industry, including environmental issues, economic issues and labour and social issues. This year’s conference, being held October 9-11 in Montreal, Canada, is being hosted by the Forum’s only Canadian member, Equifruit, Inc. a Fairtrade banana importer based in Drummondville, Quebec.

“The WBF working group we’ve been most involved with is called “Distribution of Value” and it looks at the commercial sustainability of the banana industry” says Jennie Coleman of Equifruit, noting that much of the organization’s work is done remotely given the global nature of the group’s members. “With this meeting in our backyard, we can highlight to Canadian retailers the fact that not only does this group exist, but that they should think about a sustainability policy on their bananas.” Currently, Sobeys Quebec is the only major retailer with a Fairtrade banana program in place on its organic offering.

Global learnings
As Coleman notes, Canada hasn’t caught up to where other countries are when it comes to its approach to buying and retailing bananas. Major European retailers, such as Lidl and Sainsbury’s, have made 100% Fairtrade commitments on their banana sourcing. Others, such as Tesco, have raised prices in order for plantation workers to be paid living wages. “In Canada, there’s no government participation at play. We don’t have a supply chain watchdog the way there are in other countries,” she says. “In the UK for example, there’s the Ethical Trading Initiative, which is funded by a mixture of DFID (Department for International Development) grants and corporate membership fees. Members acknowledge issues in their supply chain and make commitments to improving on them, and are then rated by the ETI on their progress. We don’t have anything like this right now in Canada, so I’m looking to raise the profile of sustainable sourcing in banana supply chains into Canada.” 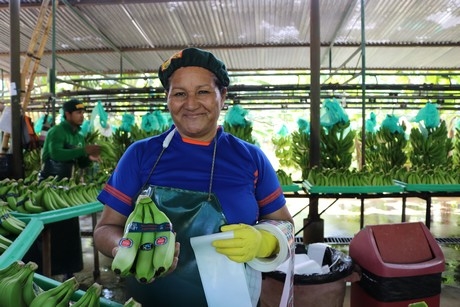 At the same time, Coleman welcomes the learning opportunity the meeting offers Equifruit. “It’s the first time we’re participating, and we’ll be at the same table as giants in the industry. We can help have a voice in these matters,” she says. “Fairtrade has a significant impact on our producers. If we’re true to our mission about wanting to improve conditions for small producers and banana plantation workers, then we have to be open to working with competitors and raising the profile on the issue.”