The fig season in California is just about to wrap up for the year. Production will soon return to the desert areas as well as Mexico, but for now growers in the San Joaquin Valley are cleaning up the remaining fruit and reflecting on a good season. Apart from some warm spells, growers were overall happy with the conditions that this summer presented.

"It's been a good year," said Paul Mesple of Mesple Farms in Fresno. "We are just about to finish up, but there are still a few growers with fruit remaining, depending on the area they're in. It was a little warm for a while during July, however temperatures largely remained around the 100 degree mark which is typical for this area. The main problem for fresh figs was water and trying to get it. Growers that had good access to water were fine."

Market fair for season
Overall, the market was reasonably good for growers, with decent volume helping to supply demand sufficiently. "Volume was close to the average, perhaps slightly higher than normal," Mesple shared.

Mesple also noted that while clamshell packaging is not new anymore, there is an increasing utilization of it. One of the main reasons is to reduce waste and ensure more of the fruit is sold at the retail level. "There is a minimal loss of moisture in clamshells, as well as waste," he said. "It helps to prevent damage to fruit in transit. Once the figs are packed, they go straight through to the store in the same package." 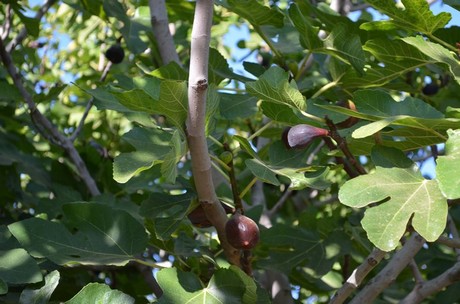 Mesple Farms grows all the main varieties of figs, including Brown Turkey, Black Mission and Kadota. Another variety is the Sierra which is a relatively new variety in the fig world, having been introduced in 2005 by the University of California. All except Mission figs grow on what is known as 'new wood', which are the branches that are less than one year old.

"Sierra figs are a green variety which are larger and are good eating," Mesple noted. "This variety complements other green varieties such as the Kadota. It's difficult to predict yields prior to a fig season as most of the varieties grow on new wood which is in contrast to other tree fruit. Only Mission figs grow on old wood. They appear early in the season and make up minimal volume."

California's increased minimum wage adds pressure
The state of California is in the process of raising the minimum wage to $15 per hour. Growers say this presents a challenge in a state where labor is already a source of high costs. The do believe it is manageable though, as long as consumers are prepared to contribute and ensure growers can still make a living.

"There has been some pressure from the increasing of the minimum wage," Mesple said. "The minimum wage is projected to increase incrementally by $1 per hour each year which is ok as long as consumers accept that they will pay more for produce. Clearly, if costs are not covered and growers make a loss, they will leave the business and turn to other more profitable crops or even other industries."