Anecoop registers drop in volume and revenue in 2013/2014 season

While the 2012/2013 campaign was record-breaking for Europe's largest fruit and vegetables marketer, Anecoop, with over 700,000 tonnes sold and 560 million Euro in turnover, the results of the most recent financial year (2013/2014) are less satisfactory, with a decrease in both volumes marketed and turnover.
"We cannot be happy with these results, but considering the circumstances, it is the second best season for Anecoop," explained Carlota Pardo, Communications manager of Anecoop, at the recent Fruit Attraction fair, held in Madrid. "Looking ahead to the 2014/2015 season, we will strive to achieve similar results to those of the campaign two years ago, or even exceed them if we can," she added.
"As far as products are concerned, the campaign has been fairly regular in general and especially negative for oranges, peaches and nectarines. The products with which we achieved the best results were kakis and apricots," she points out.
"Overall, the citrus production is smaller than last year and we expect a higher quality and better calibres, which we hope will be reflected in prices," continues Carlota Pardo.
It is worth noting that this is the second commercial campaign for Anecoop's exclusive extra-early clementine variety, Clemensoon, which went from 400 tonnes in its first season to 800 tonnes available right now for customers in selected markets such as Norway, the UK, France , Belgium and Spain. "We hope to increase the production year after year until we reach 12,000 tonnes in about 7 years." 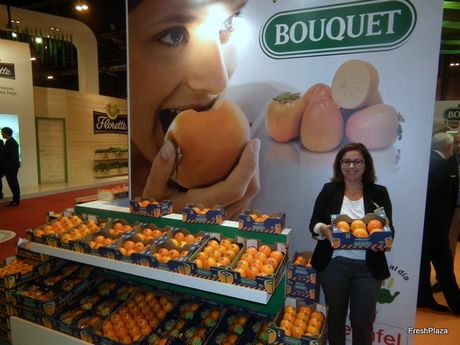 Regarding kakis, particularly the Bright Red variety which Anecoop has given preference to in recent seasons, the company expects to market around 60,000 tonnes of the 75,000 gross tonnes that were initially expected, mostly due to hailstorms in late summer. "It is still an increase in production volumes compared to last year, when we marketed about 53,000 tonnes," she affirms.
"This year we will launch TV campaigns to promote the consumption of kakis both in Spain and in Canada for the first time."
Meanwhile, Anecoop will continue developing its Integration Plan 2013-2018 for its member cooperatives and subsidiaries around the world in order to achieve a greater concentration of supply and tackle the imbalance between supply and demand.
"We offer our partners a logistics network connecting our foreign subsidiaries with their products' major destinations in order to improve their sales and help them reach markets which the cooperatives would find hard to access by themselves."